The Left’s Quest to Create Hundreds of Elizabeth Warrens

Senator Elizabeth Warren, a Democrat from Massachusetts, listens to Janet Yellen, chair of the U.S. Federal Reserve, during her semiannual report on the economy to the Senate Banking Committee in Washington, D.C., U.S., on Thursday, July 16, 2015.
Bloomberg—Bloomberg via Getty Images
By Sam Frizell

The thumbs up came from the back of the meeting room, and two hundred future Sen. Elizabeth Warrens stood up and waited for their prototype to enter. Spindly and with a bouncy step, the Massachusetts senator strode rapidly into the room and was waylaid by a friendly sea of imperfect facsimiles calling for selfies. “What a way to start the morning!” Warren said at last, breathless at the podium.

Warren was stopping by a conference on Thursday just a 10-minute walk away from the Capitol building in Washington DC, where the goal was unabashedly to bolster the Warren brand of the Democratic party. In the belly of the swank Washington Court Hotel—also the host of a recent events for steel wire producers and the beef industry—progressive candidates for municipal and state office across the country had gathered for a four-day affair to create a surge of Democratic candidates in municipal and state elections, and build a movement of rookie Warrens.

The conference, organized by the advocacy group Progressive Change Campaign Committee, was intended to train candidates and activists from states far flung as Wisconsin and Louisiana to run for office and eventually shape national policy. TIME was one of the only publications granted access to the meeting.

Much of the focus was on the nuts and bolts of effective campaigning and fundraising. Questions flew: Do candidates need to fundraise within their own district? How much time should candidates spend on fundraising calls? How do you best target voters during get-out-the-vote efforts? Should candidates’ events have red wine, or are cookies enough? The PCCC offered candidates who attended back-end internet tools replete with website templates, and readymade email blasters and event managers.

And Warren was the star attraction. “You are the progressive bench, and we need a bench,” Warren told them. Dozens of attendees wore identical blue shirts that said, I’m from the Elizabeth Warren wing of the Democratic party. “Elizabeth Warren is the North Star,” said Adam Green, co-founder of the PCCC. And the enthusiasm for Warren has spilled over all across the left: “I want to clone Elizabeth Warren into every candidate,” said Tefere Gebre the executive vice president of the AFL-CIO, in an interview with TIME two weeks ago.

In the Washington hotel, building an army of Warrens to challenge establishment-backed Democrats was exactly the point. “Yes, this is about building campaigns and winning office, but this is also about building a movement,” Warren said during her keynote on Thursday. “You are the living spark of the progressive movement.” It was a sentiment made clear by the conference organizers. “How do we elect 300 more Elizabeth Warrens?” said Stephanie Taylor, the co-founder of the PCCC who dreamt up the conference. “This training is part of it: finding them and giving them the tools to run great campaigns.”

Movement-building with Warren in the lead is in part about catching up to conservatives. Republicans can boast of presidential candidates Ted Cruz and Rand Paul, Rush Limbaugh and a formidable coalition of right-wing legislators threatening to unseat their house speaker. Meanwhile the left has a few big-city mayors, a struggling cable network (MSNBC), handful of legislators (Sherrod Brown, Keith Ellison) and a upstart presidential candidate, Sen. Bernie Sanders, who counts Eugene V. Debs and the nation of Denmark among his biggest influences. And Warren, the progressive nonpareil, has refused to run for the White House.

Anger over the Obama years is a key motivator for conservatives. The stimulant on the left is made of a milder sauce, namely, disappointment over the Obama years, and many progressive ideals have faltered in Congress and on their way to the White House.

Republicans have taken notice of Warrens influence over Democrats. While the activists met in Washington, her name came up on the Republican campaign trail in Cedar Falls, Iowa. “The fact is the Democratic Party has a problem,” New Jersey Gov. Chris Christie said. “Their problem is that Elizabeth Warren is taking over that party.”

“They’re all running to be just like Elizabeth Warren,” he added, saying that Hillary Clinton has borrowed from Warren’s playbook on the campaign trail.

Though Warren was only present for the first hour of the four-day training session, her name came up again and again. When she ran for Senate in 2012, Warren liked to make fundraising calls from her kitchen at home while boiling a pot of tea and wearing a headset, an alumna of Warren’s fundraising team, Sarah Badawi, told trainees. Joel Silberman, a speech trainer, said in a session that when he consulted Warren before a Massachusetts state convention speech, he told Warren a trick to cure nerves: count the number of steps to the podium.

Taylor and Green of the PCCC once sat on Warren’s front porch and shared lemonade and iced tea to convince her to first run for Senate, Warren noted during her address. The former director of research for Warren’s senatorial campaign, Peter Jones led a class on opposition research. (A quick Google search on Warren’s defeated opponent for Senate, Scott Brown, shows him shirtless in photos hawking diet pills, a fact that Warren recently noted in a speech.)

Most of those hoping to follow Warren’s lead at the conference don’t look anything like her or share her Ivy League background. There was the black state senator who represents Ferguson, an Indian-American candidate for Congress from a Detroit suburb, and as many pairs of sneakers as suits. Union organizers, mothers, climate activists, feminists and campaign staffers were in Washington from Vermont and Georgia.

“You are a part of a global re-owning of a populist, progressive vision of America,” said Zephyr Teachout, chief executive of the Mayday PAC which aims to get money out of politics.

Many at the conference argued local victories could sway their states, and ultimately, Congress. Over a lunch of ravioli and tagliatelli with lemon sauce and iced tea, two attendees from Rhode Island debated the merits of the conference. “The more states have something like paid leave, and it’s successful, the more likely we’ll be able to get Congress to move it forward,” Shandi Hanna, an activist at the Women’s Fund of Rhode Island. “We need to infiltrate the system and change it.”

“You look around this room people—the people I’ve met makes me realize the country is moving in a good direction,” said Margaux Morisseau, a candidate for Rhode Island state Senate.

So far, the left has been unable to create the kind of movement that caught fire on the right after President Obama’s election. But in some ways, things have changed in recent years. Cities and states like California and Rhode Island are requiring businesses to provide paid family leave; activists in New York, Los Angeles and Seattle have with mixed success pushed for a $15-minium wage; Bernie Sanders has attracted crowds of 10,000 and more in purple and red states like Wisconsin and Arizona. To progressives, those are signs of shifting winds. “People will start to realize there’s a change happening from underneath. They’ll either have to evolve or die,” said Chris Larson, a state senator in Wisconsin.

Some date the recent wave in progressive activism back to Howard Dean’s 2004 campaign. A left-backed candidate, Dean’s loss in the primary spawned Democracy for America, a progressive PAC. The past five years has seen a slow increase in organizational support for progressive Democrats. DFA, MoveOn.org, Progressive Majority also aim to train progressive candidates for office.

It’s Warren’s message that has helped motivate them in recent years, and attendees repeatedly mentioned Warren’s name during the conference. “We can whine about this, we can whimper about this, or we can fight back,” Warren said Thursday. “I’m fighting back!”

The goal, of course, is victory against Republicans, and against old-line Democrats in primary contests. If they win, it will come the way of conquerors of old: by conversion, or a rout.

“It’s our movement,” said CM! Winters Palacio, a Chicago librarian (with punctuation in her first name) who is running for City Council and says she is facing pushback from the moderate Democratic mayor, Rahm Emmanuel. “We will eat the elephant one bite at a time.” 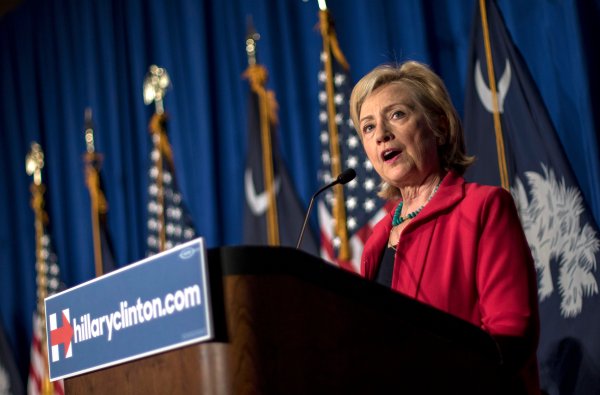 Hillary Clinton Praises Mother In First TV Ads of 2016
Next Up: Editor's Pick