Jeb Bush on His Campaign Cash: Tough Luck if Critics Don't Like It

Former Florida Gov. Jeb Bush has no apologies for using a network of political committees to out-raise his rivals for the Republican presidential nomination.

“You are officially certified as the $120 million man,” Politico’s Mike Allen said to Bush during an on-stage interview at a summit of GOP mega-donors.

“How much is too much?” Allen pressed.

“I don’t know. But I think you might as well frontload it if you can. This is along haul. Are we supposed to just warm up and work your way into it? Am I missing something here?” Bush said.

Bush’s campaign raised $11.4 million and the Super PAC supporting him collected more than $103 million so far, according to finance filings. Another political committee backing Bush brought in almost $5.4 million. Of the $120 million the groups have collected, they have spent less than $14 million so far.

“Money helps. I’m playing by the rules of the game the way it’s laid out,” said Bush, who worked with the political committees before officially becoming a candidate. He also sent several of his former top advisers to outside groups to manage the unlimited cash machines. “If people don’t like it, that’s just tough luck,” he added.

Bush’s lack of concern over collecting large amounts of money was shared by the 450 mega-donors who were meeting this weekend at events organized by conservative billionaires Charles and David Koch. Together, they plan to spend $889 million on non-profits, activism and politics before Election Day 2016. 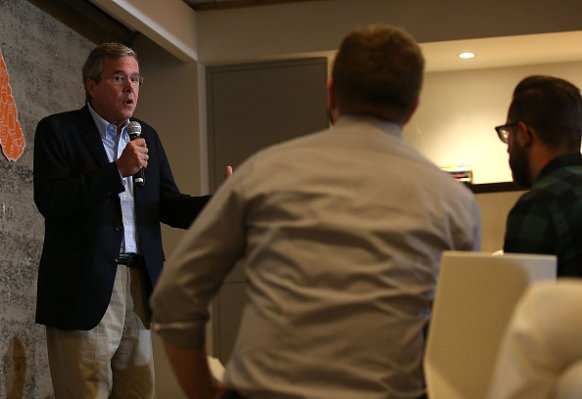 Jeb Bush Wishes He Could Speak Like Obama
Next Up: Editor's Pick