When it comes to double standards, Carly Fiorina considers herself a triple threat: female leaders are treated differently than men, conservative millionaires and billionaires get tougher treatment than liberal ones and political elites are favored over neophytes.

Not that she minds. The Republican presidential candidate says the fact that she has an uphill climb is part of the rationale for her campaign.

“I’ve been called a bimbo at work. I’ve been called the other name that starts with a B,” she said, noting that she is often asked about the ways a female President might approach the White House differently than her predecessors. “Can you think of a single instance in which a man’s judgment might have been clouded by his hormones? Any at all? Ever in the Oval Office?” Fiorina said to applause.

Fiorina said she also sees a double standard in how the ultra-rich are described by journalists. Speaking before those very people, she chided Politico’s Mike Allen for asking if there was too much money in the political space.

“I don’t remember seeing big newspaper articles about George Soros or Tom Steyer. The media doesn’t like one of money but it’s OK with another kind of money,” she said to applause. “Everyone has a right to speech in this country. And as we all know, any kind of speech costs money.”

Fiorina, who unsuccessfully ran for Senate in California in 2010, is running on her outsider credentials. She badly trails her rivals and is at risk of missing the cutoff threshold for Thursday’s primetime debate in Cleveland. She insists it’s too soon to tell if she will get a podium or not. “We don’t know what debate we’re in yet and we don’t know which polls (organizers are using to draw the cutoff,)” Fiorina said. “I have the lowest name ID of anyone running. Over half the nation has never heard my name.”

Compare that with former Florida Gov. Jeb Bush, whom she jabbed as a member of the political dynasty that could see its third member elected President. “We have festering problems in Washington, D.C.: a government that has grown bigger, more powerful, more intrusive, more costly, more inept, more corrupt for 40 plus years,” Fiorina said. “Why do you think you are the Bush who can change that?” 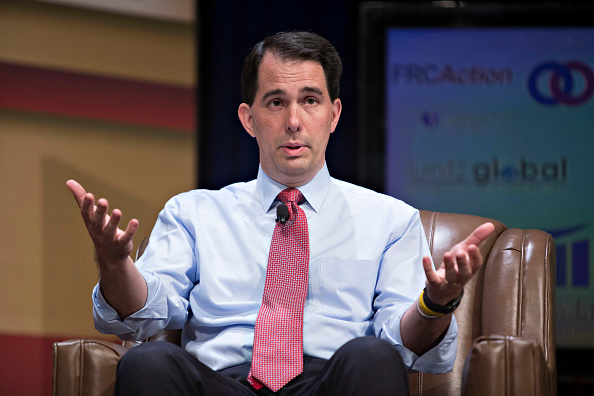 Scott Walker Still Isn't Sure If Obama Is Christian
Next Up: Editor's Pick