J.J. Abrams Broke His Back Helping Harrison Ford on the Set of Star Wars: The Force Awakens

Mission: Impossible – Rogue Nation producer J.J. Abrams was a guest on Thursday’s episode of The Daily Show, and while Abrams was ostensibly there to promote the new Tom Cruise movie, host Jon Stewart only wanted to talk to him about Star Wars. Abrams didn’t reveal anything substantial about directing The Force Awakens, but he and Stewart did get to geek out about Harrison Ford.

“The guy is like a real-life superhero. He should have the Marvel logo above his name,” Abrams said, before recalling what happened when the actor broke his leg on The Force Awakens set last year.

“He’s down there and he’s toughing it out. He’s a super human being. He’s literally lying there making jokes,” Abrams said. “This door had gone down, and I’m trying to help lift it up – because that’s the kind of guy I am. I’m trying to lift up this door and I feel this pop in my back. I’m like ‘Uh, that’s weird.’”

Cut to a couple of days later, and Abrams found himself at a doctor’s office. “He goes, ‘Oh you have a broken back,’” Abrams said. “I broke my L4 trying to lift this door.”

Abrams said he had to wear a back brace under his shirt, while Ford – despite his broken bone – healed relatively quick, and was even able to run at Abrams to give the director a hug at an event a few months later.

“I felt like the most nebbishy Jewish director ever,” Abrams joked about his injury. He then broke into a pretty great Woody Allen impression.

Read next: Names for Parts of Pluto’s Moon Could Be Drawn From Star Wars and Star Trek 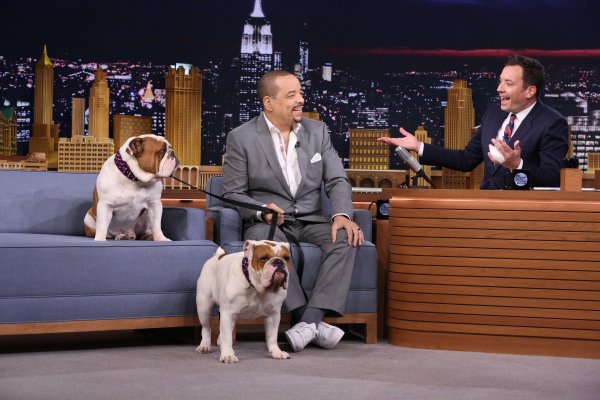 Ice T's Version of The Smurfs and Care Bears Will Make You Rethink Your Childhood
Next Up: Editor's Pick