Congress Must Reject the Iran Deal

Ideas
By Sen. Tom Cotton and Rep. Ron DeSantis
Tom Cotton is a Senator from Arkansas. Ron DeSantis is a Congressman from Florida. They both served in Operation Iraqi Freedom.

Over the last several months the Obama Administration has consistently maintained that no deal with Iran is better than a bad deal, but we now know this claim — as with many claims made throughout these negotiations — was merely political spin. The deal announced by the Obama Administration last week provides Iran with $150 billion in unfrozen assets with which to fund terrorism, puts our national security at risk, and does little to stop Iran’s quest for a nuclear weapon. For these reasons and others we believe that Congress must reject this deal.

President Obama promised that a deal with Iran would “make our world safer”, but it’s difficult to believe that giving the world’s biggest state sponsor of terrorism more money contributes anything to our safety. During Operation Iraqi Freedom, Iranian-supplied roadside bombs accounted for as many as 1,500 American combat deaths. These deaths were orchestrated by the Quds Force from Iran’s Revolutionary Guard Corps and its leader, Qasem Soleimani. For those that served there this memory is still raw. When we remember those fallen comrades as well as those who lost their lives in Iran-sponsored terrorist attacks it is difficult to believe we would enter into a deal with a regime that supports such behavior.

The recent rantings of Iran’s Supreme Leader Ayatollah Khamenei are sufficient to dispel any notion that this deal with Iran will cause the ayatollahs to disavow terrorism and join the civilized world. When followers of the ayatollahs chant “death to America” in the streets, they mean it. They will stop at nothing to end our way of life. Worse, the Obama administration has acknowledged that the Iranian regime will plow a portion — if not all — of the monetary windfall it receives from the deal into terrorism. That terrorism is likely to be targeted at the United States and our allies.

During his reelection campaign, President Obama also promised that any deal with Iran would require Iran to “give up its nuclear program and abide by the U.N. resolutions that have been in place,” which do not permit Iran to enrich uranium. The president said flatly that “the deal we’ll accept is [the ayatollahs] end their nuclear program. It’s very straightforward.” In fact, it didn’t end up being so straightforward. The deal goes beyond the mere acceptance of an Iranian nuclear program; it requires the international community to facilitate Iran’s program, even to assist Iran in protecting its program from sabotage. Just a few years ago, a deal that permitted Iran to develop advanced centrifuges would have been unthinkable. The deal makes the international community, including the United States, active sponsors of Iran’s development of a nuclear weapons capability fortified against outside efforts to sabotage it.

When explaining the deal to the American people, President Obama said it was based on verification, not trust. Yet this deal forces us to rely on a convoluted bureaucratic process to even initiate the inspections of undeclared nuclear sites that are critical to ensure that Iran is not assembling a nuclear weapon. Iran can drag that process out for 24 days, concealing any offending conduct in the meantime. This is a far cry from “anytime, anywhere” inspections his administration lauded earlier in the negotiating process.

And if violations are identified the deal includes an explicit provision relieving Iran of its obligations under the deal in the event that the sanctions are reinstated. This represents a “nuclear snapback” that will likely negate the prospect of imposing sanctions in response to Iranian violations. Worse, the deal even lifts sanctions on Iran’s Revolutionary Guard Corps, including Quds Force Commander Qassem Soleimani, whose activities killed so many American servicemen in Iraq.

Supporters of the deal maintain that the only alternative to this deal is war. It’s something President Obama has hinted at often. But it should come as little surprise that once again, his rhetoric isn’t reality. President Obama was right when he previously said that the alternative to a bad deal is no deal. No deal would have provided us with the opportunity to reset the negotiations and achieve a better deal, one that actually requires Iran to completely disarm its nuclear program.

Instead, we are faced with a bad deal that will significantly degrade our national security. The debate on this issue may be the most important of our time in Congress and our votes on this deal will have lasting consequences.

Over the next 60 days, Congress must work to share the fatal flaws of the nuclear deal with the American people. Congress then must reassert its constitutional obligation to evaluate international agreements, vote on the deal, and stand strong in our duty to defend the United States’ national security.

We must forcefully reject this fatally flawed nuclear deal with Iran. The world is watching, and hoping, for the United States to step up once again. 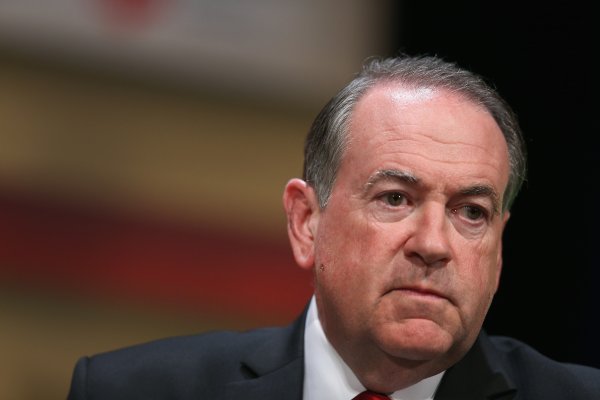 Please, Mike Huckabee, Don't Evoke the Holocaust to Disagree With the Iran Deal
Next Up: Editor's Pick