There’s a new woman in Ethan Hunt’s life, and she’s causing him no end of trouble.

In Mission: Impossible—Rogue Nation, the fifth film in the spy franchise, Tom Cruise’s Hunt finds himself dangerously entangled with a morally complicated agent named Ilsa Faust, played by the Swedish-born Rebecca Ferguson. Ferguson has been nominated for a Golden Globe for her TV role in the BBC miniseries The White Queen, but this is her introduction both to the Mission universe and to many members of the audience.

And what an introduction. Ilsa takes part in just about every fight, and does so barefoot, after shedding her vertiginous heels. She’s also a character whose shifting loyalties make Rogue Nation the most satisfyingly whiplash-inducing installment yet. Ferguson spoke to TIME about doing her own stunts and how Ingrid Bergman inspired her performance.

TIME: There’s a lot of water under the bridge when it comes to the characters in the Mission: Impossible franchise. Were you nervous about entering this world as a new character?

Rebecca Ferguson: Yes, in different ways. First of all, it’s quite nerve-wracking going into a film, whether it’s a franchise or new, with people you respect. But living up to expectations is different, and this franchise has an established group of characters. Finding your spot in an already-created team is challenging.

It must have been appealing to you that this character is the rare female lead in a spy thriller who gets to really be a part of the action. What did you make of the script?

I think what made me happy was when I first met with Tom and Chris, they didn’t have a script. They described this new character, they didn’t call her a “strong woman” or “femme fatale,” words we’re used to hearing used describing female characters. They said “independent,” “strong,” “Ethan Hunt’s match.”

I feel like your character starts in a fairly stereotypical role—a manipulative, double-dealing spy—and then ends up somewhere wildly different.

I was so happy with that! You saw the first scene and you say, Oh, here’s the femme fatale: Already we have it sorted according to how society sees it. But I’m happy it worked. It means we did a good job.

Each Mission: Impossible film has had a different director, and each director has brought to bear on the franchise a new style. Christopher McQuarrie is less of a known quantity than past directors like Brad Bird or Brian De Palma: How would you advertise this installment to potential viewers on the fence about seeing it?

I loved the energy of it; our costume designer introduced hard shapes and soft colors. And I tried to look back on Ingrid Bergman and the way she would move, and other starlets from that era. They were quite laid-back and calm.

Tom Cruise has gotten a lot of press for doing his own stunts for this film, including one instance where he’s dangling off the edge of a plane. What’s it like working with someone like that?

It takes a lot of training! Tom moves very fast, to try to catch up to his shadow is hard work. We had a day sprinting down the street, and he’s Michael Schumacher on legs. I heard Tom scream, “Am I going too fast for you?” He’s very chivalrous.

Did you do your own stunts?

When I met Tom and Chris, knowing I was going into a Mission: Impossible film… Mission is about very cool stunts and fighting sequences, and I was extremely excited about getting to train and learn a physical role. And to watch Tom in action, how he works and trains, it’s phenomenal. As soon as I landed, I went from the airport to the gym, and worked six hours, six days a week: weapons training, holding my breath, running, choreography. Tom would train separately, and then we’d meet and fight and see how we adapt to each other.

Do you think it helps the film that people have few preconceptions of your work?

If I look at another actress who’s new, and I don’t have any established thoughts about her acting, maybe it does help put me in a mindset, watching her work. Being the actress in this situation, I’m just training to do the best I can. We put people in different categories, but I love the idea of people expecting the unexpected when it comes to my work.

Your character, along with the plot of the film, goes through various convolutions. Films tend to shoot out-of-sequence; how’d you keep straight where you were at any given moment?

There was a lot of discussion. I would ask, “Shouldn’t I be running away? Why am I fighting this guy?” But I’m working with an incredible storyteller who was very open-minded. We’d shoot in different variations; the more material, the better.

That brings us to the reporting that the ending of this film changed during the shoot. What’s it like living through this as an actress?

Having it change a bit—it wasn’t a shock. It kept me on my toes: I would always be prepared, but it was like improvising. When it came to stunt work and the fighting sequences, that would never be thrown on you, because that’d be dangerous, but the dialogue and the storyline changed. Those were the two stories being told at the same time.

Do you feel as though you’ve scratched the action-film itch, now?

I want to do more! Doing a film like this, challenging yourself in a completely different way, you feel happy and exhausted, because it’s a difficult job. I went from filming this to working on a Stephen Frears period film—where the shoes stay on. 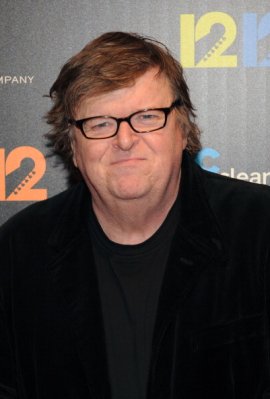 Michael Moore to Target America's 'Infinite War' in Next Movie
Next Up: Editor's Pick