Kentucky Man Arrested for Shooting Down a Drone Over His Property

Kentucky police charged a man on Sunday for shooting down a drone that was flying over his home.

William H. Meredith, 47, told police in Hillview, Kentucky that his children alerted him to a camera-mounted drone hovering around the neighborhood. Meredith says he got his shotgun and waited for the drone to fly over his property before shooting, according to WDRB Louisville.

“Within a minute or so, here it came,” Meredith told WDRB. “It was hovering over top of my property, and I shot it out of the sky.”

Police arrested and charged Meredith with two felonies, first degree criminal mischief and first degree wanton endangerment. The owner reportedly told the police the drone was worth over $1800, and was being used to take pictures of a friend’s home.

FAA guidelines say drone pilots must receive permission from property owners pre-flight when flying over a residence — but a FAA spokesperson told local media that shooting at an unmanned aerial vehicle posed a bigger threat.

Meredith, however, said he had every right to take the law into his own hands. “Everyone I’ve spoken to, including police, have said they would have done the same thing,” he said. 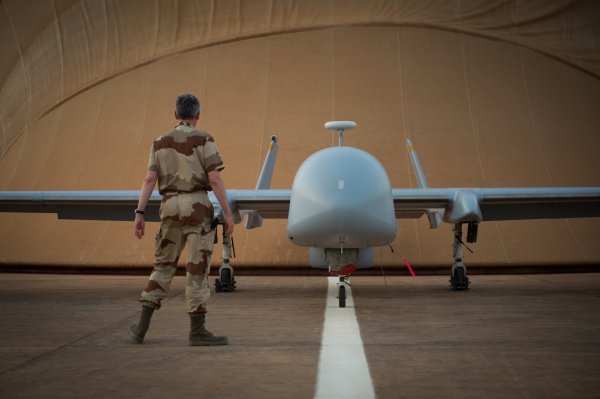 This Is How the Air Force Plans to Fix its Drone Pilot Shortage
Next Up: Editor's Pick