Philippe Petit (center) answers reporter's questions on Aug. 7, 1974, as he is escorted from Beekman Hospital by Port Authority police officer in New York City. Petit was arrested after he walked a tightrope between the two towers of the World Trade Center.
New York Daily News Archive / Getty Images
By Jennifer Latson

Whether you take Philippe Petit’s tightrope walk between the Twin Towers as art, daredevilry, or madness, it’s hard to deny the awe it inspired. The French stuntman’s larger-than-life story has already made it to the big screen once, in the Oscar-winning 2008 documentary Man on Wire. This fall it will appear in dramatized form as The Walk, starring Joseph Gordon-Levitt as Petit.

The elements of Petit’s most famous achievement are inherently dramatic, of course, in nearly every way. On this day, Aug. 7, in 1974, he walked between the just-erected towers of the World Trade Center, performing acrobatic feats on an inch-thick cable 1,350 feet above the ground — without a safety net.

Almost as impressive were the feats he and a small group of risk-tolerant friends performed to get the stunt off the ground in the first place, the heist-like scheming that made Man on Wire “sort of an Ocean’s 1350,” according to TIME’s review.

That scheming took three months and more than 200 visits to the World Trade Center construction site, with Petit and his accomplices often in disguise, according to the New York Times’ 1974 story. On one trip, he masqueraded as a reporter for a French architectural magazine so he could dig up information about the conditions at the top of the towers, according to the Daily Mail.

Later, he and four friends dressed as construction workers to carry their equipment to the top floor. On the day of the performance, they posed as architects, concealing a bow and arrow in a cardboard tube meant for blueprints, per the Daily Mail. They shot an arrow carrying a hemp cord between the towers and ran heavier and heavier lines across it until they were able to lay the steel cable on which Petit would walk just after dawn.

He defied death, and the police, for more than 45 minutes while he did “knee bends and other stunts,” per the Times. And although he was arrested at the end — for disorderly conduct and criminal trespass — he pulled off another sleight of hand by escaping prosecution in exchange for a promise to stage a free aerial performance at Central Park.

That he accomplished what he set out to do speaks as much to the strength of Petit’s plan as to his boldness and nimbleness. In fact, Petit was plotting this high-wire act before construction on the towers had even begun. He’d read that the World Trade Center would be the world’s tallest building and dreamed of conquering it — even after Chicago’s Sears Tower stole that superlative. The attraction, of course, was that the World Trade Center had two spires: the better to string a wire between.

“If I see three oranges, I have to juggle. And if I see two towers, I have to walk,” Petit explained after his stunt, per the Times.

Unlike Danny Ocean’s heist crew, Petit told a reporter that he did not expect to profit from the performance — although the Times noted that “two men who said they were friends of Mr. Petit’s did make the rounds of news offices shortly after the event, offering to sell exclusive photos taken from the tower roof.”

Read more about the building of the Twin Towers and the Sears Tower, from 1973: The Tallest Skyscraper

For your security, we've sent a confirmation email to the address you entered. Click the link to confirm your subscription and begin receiving our newsletters. If you don't get the confirmation within 10 minutes, please check your spam folder.
Most Popular on TIME
1
Bernie Sanders Mittens Memes Take Over Social Media
2
President Trump Presses a Button in the Oval Office to Get a Coke
3
Why Winter Olympic Athletes Are Getting More Condoms Than Ever Before 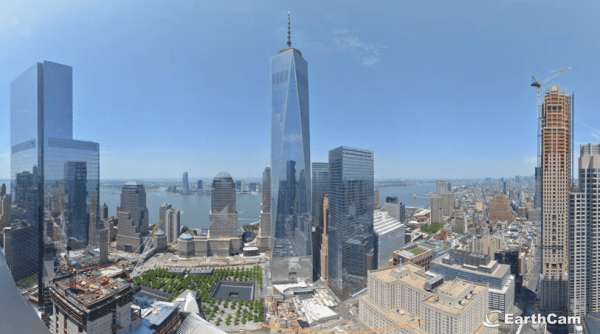 See an 11-Year Time Lapse of One World Trade Center Going Up
Next Up: Editor's Pick