Bernie Sanders hosted a massive grassroots organizing event on Wednesday evening that featured simultaneous parties in all 50 states, as the upstart Democratic candidate seeks to mobilize the progressive base of the party.

Sanders appeared at a house party in Southwest Washington, D.C., and made remarks broadcast simultaneously to all the meeting locations in the country, from Alaska to Florida.

“Tonight is a historical night and all of us are making history,” Sanders said at the event, reading his notes from a music stand. “Why are we seeing spontaneous uprisings if you like and meetings in cities and town all over this country? My answer is the American people are saying loudly and clearly, enough is enough.”

During an abbreviated version of his standard stump speech in which the Democratic presidential hopeful pointed to wealth inequality and racial injustice, Sanders also pointed to the massive size of the event he was hosting.

More than 100,000 people had RSVPed to participate in some 3,500 parties in houses, living rooms and coffee shops, Sanders’ campaign said on Wednesday night, making it the biggest online organizing event of the 2016 campaign. The large turnout Wednesday is an important part of Sanders’ plan to build enthusiasm among the Democratic party’s base.

“Bernie Sanders alone as president of these United States is not going to solve all these problems,” Sanders said. “The only way we take on the Koch brothers and take on the billionaire class, and people who have unbelievable money and power, the only we can do that is when we put together a strong grassroots movement of millions and millions of people.”

The vast number of parties made for an eclectic mix. One screening party held in Asheville, North Carolina, featured three punk rock bands that helped fundraise for Sanders afterward. Another in Texas was called “Brisket and biscuits for Bernie,” in honor of the food that was served. One event was hosted in a town in the Alaskan wilderness of about 1,000 residents. At another party, a guest brought four live chickens.

The tactical purpose of all parties was to create a larger network of grassroots volunteers, who then can reach a greater network of supporters. The Sanders campaign has relied heavily on volunteers due to its thin staff of approximately 50, a little more than one-tenth the size of Hillary Clinton’s campaign. The viewers at the various house parties were asked to volunteer and join a chain of text messages.

“We need you to bring this movement to your community to do unglamorous but essential work,” said Claire Sandberg, a digital organizer for the campaign who addressed the camera after Sanders. “Like knocking on doors, calling voters, voter registration.”

Sanders arrived about 15 minutes before he was due to go live at the part in the Washington apartment, and in the middle of the crowded foyer spent several minutes working through his handwritten speech notes on a clipboard. (His campaign notes that Sanders writes all his own speeches.)

He joked with his introducer when he accidentally mixed up their papers. “Somebody has the brains here, and it’s not me,” Sanders said. He laughed when one partygoer wearing a beard and a colorful shirt shouted to Sanders, “Can I get you a tie-dye?”

Many of the attendees were Sanders volunteers enthusiastic about the candidate’s message. “You hear the word and you’re like, ‘I’m in,'” said Jon Culver, a 29-year-old who works at a tech startup in Seattle. “The crazy distribution of wealth, income inequality, those are big ones for me. He’s very progressive he’s all for women’s rights and good family values. He’s solid.”

The day of Hillary Clinton’s kickoff rally in early June, the campaign held an online organizing event that included around 650 parties across the country, about one-fifth of the number of events Sanders’ campaign has organized.

The Sanders event’s sheer size is a mark of the grassroots progressive enthusiasm for the liberal Vermont senator, who has repeatedly turned out crowds upwards of 10,000 people, larger than any other campaign.

Sanders has repeatedly emphasized building a large movement in favor of a slew of progressive ideas over his winning the Democratic nomination. He is trailing far behind Hillary Clinton in national polls, with 22% favorability among voters compared with 57% for Clinton.

At the end of the event, the party’s host, Manisha Sharma, a financial services regulatory attorney, gave Sanders a blown-up photo of Mahatma Gandhi with a cleverly selected quote.

Sanders read it: “First they ignore you, then they laugh at you, then they fight you, and then you win,'” he read. “Maybe that is what this campaign is about.” 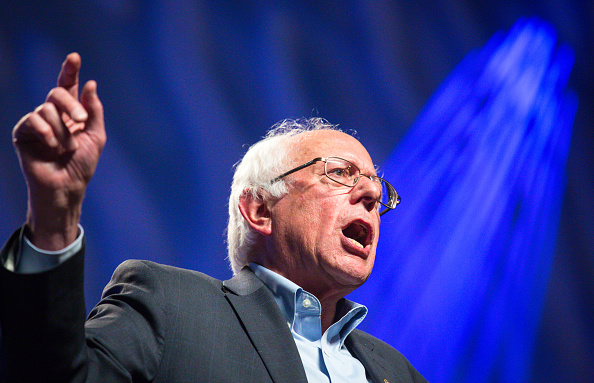 Bernie Sanders Holds Biggest Rally of His Campaign
Next Up: Editor's Pick