The Pope Francis Statement That Changed the Church on LGBT Issues

Pope Francis greets the attendees of a conference as part of the II Meeting of People's Movements in Santa Cruz, Bolivia, on on July 9, 2015.
Amanecer Tedesqui/CON—Getty Images
Ideas
By Christopher J. Hale
Hale is a Democratic politician from Tennessee; he has been a Catholic nonprofit executive and helped lead faith outreach for President Barack Obama.

“If someone is gay and searches for the Lord and has good will, who am I to judge?” Two years ago Tuesday, Pope Francis uttered these words, sending shockwaves throughout the Catholic Church and the world. His position stood in contrast to that of his predecessors: Months earlier, Pope Benedict XVI suggested that gay marriage was a threat to global peace.

Under the leadership of Pope Francis, the Catholic Church is evolving on LGBT issues. As theologian David Cloutier has noted, the process isn’t political—it’s spiritual. The church is beginning to discern more deeply the full measure of God’s presence in LGBT individuals and, yes, couples, too. There have been five notable moments in this evolution.

In an interview with America Magazine, Pope Francis revealed his pastoral approach toward the LGBT community:

2. Pope Francis suggested the church could be open to civil unions — March 5, 2014

Francis said in an interview that the church could be open to same-sex civil unions, a view he had first voiced as archbishop of Buenos Aires. The pope reiterated the church’s teaching that a “marriage is between a man and a woman” but argued that on civil unions, “we have to look at different cases and evaluate them in their variety.”

The summer of 2014 was a remarkable period during which a number of high-ranking Catholic prelates signaled that Pope Francis’s more open posture had permeated throughout the Catholic world. In May, a top-ranking Italian bishop said that the church should listen to same-sex marriage arguments. A few weeks later, Brazilian Cardinal Cláudio Hummes, said he “didn’t know” whether Jesus would oppose gay marriage. In early September, New York Cardinal Timothy Dolan approved the St. Patrick Day Parade Committee’s decision to allow a gay group to march in the 2015 parade under their own banner. (Twenty-one years earlier, one of Dolan’s predecessors, Cardinal John O’Connor, said that to allow a gay group to march would be a slander to the Apostles’ Creed.)

4. The Synod on the Family’s interim report affirmed the “gifts and qualities” of LGBT individuals — October 2014

The bishops gathered for Pope Francis’s Synod on the Family in October 2014 issued a report suggesting that the church should create a more inclusive space for LGBT Catholics. In the document, they said that the LGBT community has “gifts and qualities to offer to the Christian community,” and they asked, “Are we capable of welcoming these people, guaranteeing to them a fraternal space in our communities?” Though this language was rejected in the final draft, it sparked a conversation that the church could formally change its stance toward the LGBT community when the bishops meet again this October.

5. The pope began a series of meetings and dialogues with LGBT individuals and activists — 2015

Throughout the first months of 2015, Pope Francis had several encounters with LGBT individuals and groups, including a transgender man from Spain who was excluded from his parish community, and gay and transgender prisoners in Naples. The Vatican also gave the VIP treatment to a pro-LGBT American Catholic group visiting Rome and the pope met with a gay Paraguayan activist during his recent trip to South America.

Collectively these events signal a church that is more open to welcoming the LGBT community and the diverse realities of the modern family than it was two years ago. After the Supreme Court’s ruling in support of same-sex marriage last month, Blase Cupich, Pope Francis’s handpicked archbishop of Chicago, said the church’s respect for LGBT individuals “must be real, not rhetorical, and ever reflective of the Church’s commitment to accompanying all people.” Such language would have been rare two years ago. Today it’s expected. Thank God. 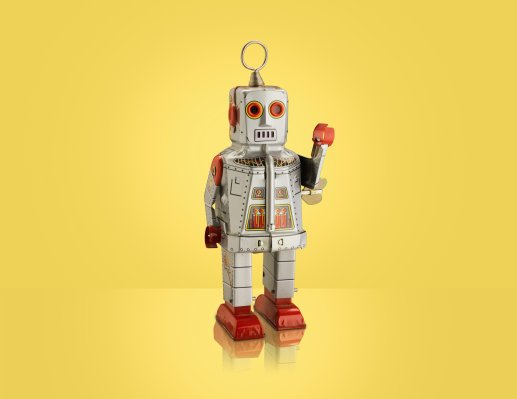 Robotic Sports Will One Day Rival the NFL
Next Up: Editor's Pick