Fat Water Is Now a Thing

The thing: A $3.95 bottle of water mixed with fat, a sweetener and some flavors. The new 20-calorie beverage, called FATwater, was developed by entrepreneur Dave Asprey, creator of the Bulletproof Coffee craze that still has people adding large amounts of butter and oil to their coffee in the hopes of losing weight. FATwater isn’t a weight-loss drink, per se (each bottle contains 2 grams of fat). Rather, the company bills its product as an alternative to sugary coconut waters and energy drinks.

Asprey says he uses a patented process to take purified water and mix in tiny droplets of “Bulletproof XCT Oil”: medium chain triglycerides (MCTs) derived from coconut oil. “The water looks kind of iridescent, pearlescent,” Asprey tells TIME. “It has these tiny, invisible droplets of fat that your body really, really likes.” FATwater can be bought bottled or in a concentrated gel that you mix with water yourself.

The hype: Asprey says FATwater is more hydrating than plain water because the nanoparticles of fat “bring the water into the cells more effectively.” He adds: “Drink a glass of water, and some of it will absorb and some of it won’t. But when your body sees that fat, it says, ‘Oh, come on in, this is pure energy.’ It brings the water in with the fat.”

Plus, he says, “you get a little bump of energy.”

The bottle says this: “XCTs follow a special metabolic pathway to burn fat instead of storing it,” the label reads, while giving your body “the clean, high quality fuel it needs—and nothing else.” The bottle also includes this disclaimer, which is required by federal law: “These statements have not been evaluated by the Food and Drug Administration.”

The research: It is true that medium chain triglycerides are digested differently than other fats, says Marie-Pierre St-Onge, PhD, assistant professor in the department of medicine at Columbia University’s Institute of Human Nutrition and a researcher of MCTs. Instead of being stored into fatty tissue to be used for energy later, they’re typically just burned off.

But does that mean they give you energy? “It’s actually the opposite,” St-Onge says. “You don’t have the energy—you’re not storing it—so you’re burning it. It’s not useful energy.”

Where MCTs are useful, St-Onge says, is when you use them to replace another fat (cooking with a little coconut oil, for instance, instead of butter or olive oil). In one study by St-Onge lasting 16 weeks, people who consumed 18-24 daily grams of medium chain triglycerides lost more weight than people who ate the same amount of olive oil.

“The type of fat that’s used in FATwater increases overall thermogenesis, which is fat-burning in the body,” Asprey says. But St-Onge, who’s own research has shown that MCT oil does enhance diet-induced thermogenesis compared to longer-chain fats, is skeptical that 2 grams of MCT oil—the amount found in FATwater—would have any impact on fat burn. She used a minimum of 18 grams all the way up to 60 grams in her research.

And what about the notion that MCTs shuttle water more effectively into the body than water ever could alone?

We asked David Julian McClements, professor in the department of food science at University of Massachusetts Amherst, who says he makes his own fat-infused emulsions all the time for research. Adding drops of oil to water infused with supplements like beta carotene, he’s found, helps your body make use of those nutrients. But improved hydration is not one of the established benefits of MCT emulsions like these, McClements says.

When asked about it, Asprey says he’s aware of the lack of research. “We’re working on specific studies for these exact formulations,” he says.

Though you’re not supposed to be able to detect the fat, one writer said: “I feel like something’s coating my tongue in a not-pleasant way.”

Read Next: Charcoal Juice Is Now A Thing 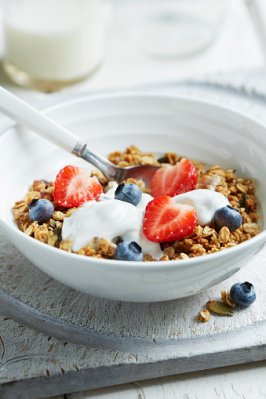 What 5 Amazing Athletes Eat for Breakfast
Next Up: Editor's Pick