A Dying Language Is Making a Comeback

In the summer of 1930, at the dawn of the Great Depression, a 21-year-old linguist named Morris Swadesh set out for Louisiana to record the area’s Native American languages, which were disappearing rapidly.

Morris and his peers were in a race against time to document them, and in the small town of Charenton on the Bayou Teche, he encountered Benjamin Paul and Delphine Ducloux, members of a small tribe called Chitimacha – and the last two speakers of their language.

But today, if you visited the Chitimacha reservation, you’d never know that their language went unspoken for half a century.

Over the past several decades, many Native American tribes have participated in what has become a robust language revitalization movement. As their populations of fluent speakers dwindle and age, tribes want to ensure that their heritage languages are passed on to the next generation – before it’s too late.

But because the Chitimacha tribe had no living speakers for a number of decades, it made the challenge that much greater. In the end, the story of the language’s decline, loss and rebirth is a remarkable example of cultural survival.

Why document a language?

Only a small portion of the world’s estimated 7,000 languages are well-documented in places like dictionaries and grammar books. Those that are least well-documented are the most endangered.

Many dead or dying languages contain exotic features of verbal and written communication. Chitimacha, for example, doesn’t use a word “be” in phrases like “she is reading.” Instead, speakers must use a verb of position, such as “she sits reading” or “she stands reading.” These are things that challenge linguists’ understanding of how language works.

By working with Ben and Delphine, Morris was trying to capture a small piece of that linguistic diversity before it vanished.

One day, with Morris sitting on Ben’s porch dutifully scribbling down his every word in a composition notebook, Ben finished a story (a riveting tale of how the Chitimacha first acquired fire by stealing it from a mythical old blind man in the west). He then went on to tell Morris:

Ben passed away three years later, and Delphine not long thereafter. After their deaths, it seemed the Chitimacha language was doomed to silence.

Why do languages die?

How does a language come to have only two speakers? Why have so many Native American languages become endangered? The causes are manifold, but there are two main ones: sharp reductions in the population of the community that speaks the language, and interruptions in the traditional means of transferring the language from one generation to the next.

In the past, the former caused the most damage. Native American peoples were decimated by European diseases and subject to outright warfare.

Prior to European contact, the Chitimacha were lords of the bayou, with a territory stretching from Vermillion Bay in the west to present-day New Orleans in the east. They were expert canoe-makers and wielded extensive knowledge of the region’s labyrinthian network of waterways.

But by the time the French arrived in present-day Louisiana in 1699, the tribe’s numbers had dwindled to around 4,000, their communities gutted by European diseases that spread faster than the Europeans themselves.

After a protracted war with the French, they retreated deep into the bayou, where the their reservation at Charenton sits today. The 1910 census recorded just 69 people living there.

Only later did the second cause of language decline occur, when children on the reservation were sent to the infamous Carlisle Indian School in Pennsylvania, which interrupted the transmission of the language to the next generation.

Ben and Delphine, born in the latter half of the 1800s, were part of the last generation to learn the language at home. Eventually their parents and many of their peers passed away, leaving them as the last two speakers of the language.

Renaissance on the bayou

Ben probably never imagined that the efforts of him and Delphine would spark the tribe’s linguistic renaissance, awakening their language from 60 years of silence.

In the early 1990s, cultural director for the tribe Kim Walden received a call from the American Philosophical Society Library informing her that they had all of Morris’ notebooks, and even his drafts for a grammar manual and dictionary, which totaled hundreds of pages in all. Thus began the herculean effort to revive the language.

The tribe put together a small-but-dedicated team of language experts, who set out to learn their language as quickly as possible. They began to produce storybooks based on Ben and Delphine’s stories, and word lists from the dictionary manuscript.

In 2008, the tribe partnered with the software company Rosetta Stone on a two-year project to create computer software for learning the language, which today every registered tribal member has a copy of. This is where I came in, serving as editor and linguist consultant for the project, a monumental collaborative effort involving thousands of hours of translating, editing, recording and photographing. We’re now hard at work finishing a complete dictionary and learner’s reference grammar for the language.

Today, if you stroll through the reservation’s school, you’ll hear kids speaking Chitimacha in language classes, or using it with their friends in the hall. At home they practice with the Chitimacha version of Rosetta Stone, and this past year the tribe even launched a preschool immersion program.

The kids even make up slang that baffles adult ears, a sure sign that the language is doing well – and hopefully will continue to thrive, into the next generation and beyond. 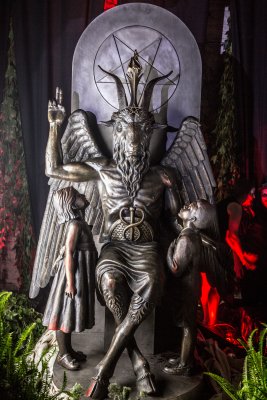 Hundreds Gather for Unveiling of Satanic Statue in Detroit
Next Up: Editor's Pick