How the Legacy of Slavery Affects Black Americans Today

On July 22, in announcing the federal indictment of Charleston killer Dylann Roof, Attorney General Loretta Lynch commented that the expression of forgiveness offered by the victims’ families is “an incredible lesson and message for us all.”

Forgiveness and grace are, indeed, hallmarks of the Black Church.

Since slavery, the church has been a formidable force for the survival of blacks in an America still grappling with the residual effects of white supremacy.

This was eloquently illustrated in the aftermath of the Charleston church massacre. Americans rightly stood in awe of the bereaved families’ laudable demonstration of God’s grace in action.

But what about the psychic toll that these acts of forgiveness exact?

Events like Charleston put a spotlight on the growing body of literature that looks not only at the United States’ failure to have authentic conversations about slavery and its legacy but also at the mental health impact of forgiving acts of white racism and repressing justifiable feelings of anger and outrage – whether these are horrific acts of terrorism or nuanced microaggressions.

I am a social work educator and practitioner with 25 years of experience in the field of mental health. I teach at one of the nation’s leading schools of social work, committed to preparing its graduates to work with racially and ethnically diverse populations. It is time, I believe, to bring this new field of inquiry into the mainstream.

The church as buffer

In his seminal book, Mighty Like A River, the Black Church and Social Reform, sociologist Andrew Billingsley asserts that the Black Church is the only African-American institution that has not been reenvisioned in the image of whites.

His research illuminates the role of religion in building the resilience that allows blacks as a people to overcome the various forms of terrorism and oppression endured over centuries that sustain doctrines of white supremacy.

Indeed, in his analysis of the African-American family, Billingsley concludes that it is “amazingly strong, enduring, adaptive and highly resilient.”

But as we pay homage to church and family in buffering blacks against the full effects of white racism, we must not obscure or diminish racism’s impact on the mental health that few blacks – irrespective of educational, social or economic status – will escape.

There is increasing evidence that repressing feelings associated with acts of white racism may be psychologically damaging and lay the foundation for future mental health problems and behaviors symptomatic of post-traumatic stress syndrome.

In his co-authored book, Lay My Burden Down: Suicide and the Mental Health Crisis among African-Americans, which takes its title from a Negro spiritual describing the hardships of the slave system, he argues that one of the reasons for this increase is that African-American young men may see the afterlife as a better place.

Terrie M Williams is a clinical social worker in New York. In her book, Black Pain: It Just Looks Like We’re Not Hurting, she uses powerful personal narratives of blacks from all walks of life to illustrate the high toll of hiding the pain associated with the black experience on mental health.

Joy DeGruy, Portland State University researcher and scholar, has developed “post-traumatic slave syndrome” as a theory for explaining the effects of unresolved trauma on the behaviors of blacks that is transmitted from generation to generation.

DeGruy’s argument may be controversial, but the questions she asked are surely relevant as we try to make sense, for example, of research released this July that shows suicide rates among black elementary school pupils significantly increasing between 1993 and 2012.

The fact is that from my perspective at New York University’s Silver School of Social Work, these publications have yet to move into mainstream literature. They have low visibility in the curricula and training programs for mental health professionals.

Nor have the questions these scholars and practitioners raised led to the kind of research that is needed to support race-conscious and culturally appropriate practices for the mental health programs and agencies working with African-American families.

At the same time, however, the original thinking of authors like Poussaint and DeGruy is very much in sync with the new emphasis on trauma-informed care in social work across all fields of practice.

As the Centers for Disease Control and Prevention concluded in a May 2014 research report, undiagnosed childhood neglect or trauma is widespread among American adults and is the root cause of mental health and behavioral problems in adulthood.

Indeed, it is now the recommendation of the National Council for Behavioral Health that trauma-informed care be integrated into all assessment and treatment procedures.

This emphasis on trauma provides a new lens for developing research into the impact of slavery – and its legacy of structural and institutional racism – on black mental health today.

A difficult topic of conversation

The problem is, no one likes to talk about slavery.

For blacks descended from slaves, the subject evokes feelings of shame and embarrassment associated with the degradations of slavery. For whites whose ancestry makes them complicit, there are feelings of guilt about a system that is incongruent with the democratic ideals on which this country was founded.

Cloaked in a veil of silence or portrayed as a benevolent system that was in the best interest of blacks, slavery – much like mental illness – has become shrouded in secrecy and stigma.

Associated emotions are pushed away.

Anger, however, is a healthy emotion, as even the Scriptures acknowledge.

The God of the Old Testament is angry and vengeful. In the New Testament, Jesus vents his anger in driving the money changers from the Temple.

As research (including my own) has shown, when anger is internalized and driven deep into the unconscious, contaminated by unresolved pain, it becomes problematic.

So what happens to the anger felt by people discriminated against and, in extreme cases, physically targeted because of their race?

Not enough is known about the relationship between clinical depression and race. But there are extensive findings (including reports by the Surgeon General) that attribute racial disparities in mental health outcomes for African Americans and whites to clinician bias, socioeconomic status and environmental stressors (such as high rates of crime and poor housing). And there is evidence of a link between perceived racism and adverse psychological outcomes such as increased levels of anxiety, depression and other psychiatric symptoms.

The numbers tell a story. According to the Minority Health Office of the Department of Health and Human Services, black adults are 20% more likely to report serious psychological distress than white adults and are more likely to have feelings of sadness, hopelessness and worthlessness than do their white counterparts.

And yet there continues to be reluctance to forthrightly confront the impact of racism on mental health. Some of my colleagues, for example, say that content on race and racism is the most challenging content for them to teach. Authentic dialogue on race is constrained by the fear of being “political incorrect.” It takes less effort to promote the more inclusive liberal view that we live in a “color-blind society.”

It may be easier to allow everyone to remain in their comfort zone. But today as the U.S. faces what would appear to be an epidemic of race-based attacks committed by whites, it is time to examine how our history of racism affects the mental health of African Americans as well as that of whites. 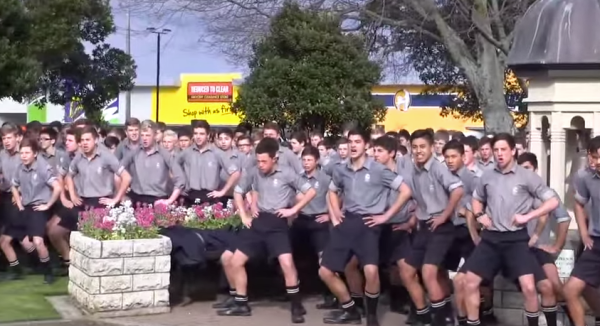 Watch These Students Perform a Powerful Haka Dance at a Teacher's Funeral
Next Up: Editor's Pick