Watch Surfer Niccolo Porcella Survive One Of the Biggest Wipeouts Ever

Big-wave surfer and all-round adrenaline junkie Niccolo Porcella has survived what some are calling the heaviest wipeout in surfing history.

Footage shot by videographer Tim Pruvost shows 27-year-old Porcella dropping down the face of a seriously big wave in Teahupo’o, southwest Tahiti, before being sucked back up and slammed toward the reef below.

Speaking to Surfing Life magazine, Porcella, who was born in Hawaii but raised in Sardinia, Italy, described how it felt to be hurled over one of the world’s biggest waves and live to tell the tale.

“It was the most violent thing — I got annihilated,” he said. “I was bounced, pinballed on the reef, the whole 9 yd. Just up and over and up and over. It held me under pretty long. My life vest got blown off right away, and then the second wave drilled me — I actually hit the bottom even harder. Hit my back, my knees, and then I got about four more waves on the head after that … washed over the reef.”

Porcella said when he miraculously resurfaced, he spat blood “a couple of times” and incredulously went back out to catch another wave.

“The best day of my life was marrying my wife, but this, for sure, was second best. I’m coming back every year,” he told Surfing Life.

Teahupo’o, also called Chopes, is renowned for having some of the heaviest and most dangerous swells in the world and has attracted big wave surfers since the late 1990s.

Porcella’s wipeout was so gnarly that Pruvost submitted it as an entry in the TAG Heuer Wipeout of the Year category of the 2016 WSL Big Wave Awards. 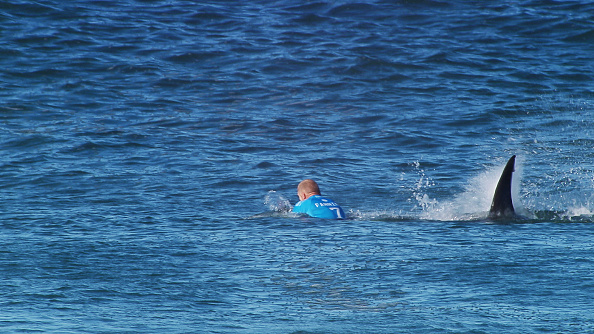