10 Things That Should Be In Your Emergency Kit

Ian Berry paddles a canoe through his front garden after the River Thames flooded on January 8, 2014 in Chersey, England.
Peter Macdiarmid—Getty Images
By John Patrick Pullen

When the big one hits — whether it’s an earthquake dismantling the west coast, a tornado ravaging middle America, or a hurricane tearing up the eastern seaboard — the only thing that will be certain is uncertainty. There’s no way of knowing if the electrical grid will go down, the roads will be closed, or if the area will be awash in flood once disaster strikes.

On the other hand, this cache of tools, shelter, and other supplies will have you prepared for all the scary questions if devastation hits. Because as experts say, it’s not a matter of if, but when.

Big Agnes Rocky Peak 4 mtnGLO: When hikers pull together their gear, they’re typically on the lookout for a tent that’s light but sturdy. This tent, while only eight pounds, actually has lights — a comfort that you’ll want in post-disaster power outages. Sleeping up to four people, the $349, 50-square-foot shelter has a string of LEDs across the top that can be powered by three AAA batteries. According to REI, that’s enough reserve power to shine those little lights for 24 hours. The strip can also be lit using a USB power source.

Cynergy Home LifeLight: A great addition to a roadside assistance kit as well as an emergency survival setup, this crank-powered LED flashlight is a bundle of disaster preparedness tools all rolled into one 10-ounce package. Accompanied by a window breaker and a seat belt cutter, the weatherproof emergency flashlight has three LED lights and a USB port built into the body, letting the torch double as a backup battery. With magnets around the lamp head and an emergency beacon light built into the handle, you can also affix this device to the roof of your car to alert search and rescue teams. Or, if you’re able to move, a compass built into the tail cap can point you home.

Delorme inReach Explorer: In emergency situations, mobile phone networks can get flooded with traffic, making it difficult or even impossible to contact loved ones. To reach them you’ll need to send your communications through a different network. This global satellite communicator may look like a walkie-talkie, but it connects to Iridium satellites, allowing you to send text messages with GPS coordinates and SOS signals to rescue centers. You can also make a trail of digital, GPS-tagged breadcrumbs for people to find you if you head off on your own. And since it’s both water- and dust-proof, the $379 handset will weather the storm much better than your smartphone.

Eton FRX5: Radio is one technology that should survive whatever mother nature throws at it, so be sure to have a sturdy, crank-powered receiver like Eton’s FRX5 at the ready. Equipped with AM, FM, and NOAA radio bands, this multi-purpose must-have can work as a flashlight, emergency beacon, USB device charger, and alarm clock when everything else fails. Four minutes of cranking away at the handle will deliver 10-15 minutes of radio power, and after 5-6 hours in the sun, the $129 life saver’s solar panels will fully charge the 2,000Ah lithium ion battery, keeping you rocking (or glued to the news) all night long.

Flamestower: When we’re reduced to our elements — which is precisely what the worst disasters do — fire will become one of our most important tools, vital for light, cooking, and warmth. Flamestower, however, can convert fire into electricity in short order (and with little bulk), making this an important part of any survival kit. The 10-ounce, $99 contraption is small enough to slip into a pocket, but when unfolded and set against an open flame, it uses the heat energy from boiling water to replenish any USB-connected, battery-powered device, like a smartphone, camera or LED light. Averaging 40 minutes of talk time over 20 minutes of heat, it lets your meal preparation come with a side of juice. The company is also currently crowdfunding a follow-up effort, Candle Charger, which does what its name implies and starts at $65 for early backers.

Goal Zero Yeti 150 Solar Generator Kit: Going off the grid is a daydream for people who can afford to reattach to it later. Goal Zero’s portable generator, meanwhile, is a great reality for those who want to maintain power after it’s gone away. Able to be charged through AC power, your car’s DC-powered battery, or via the accompanying solar panel, the Yeti 150 has enough capacity to power a laptop twice, a tablet six times, or your smartphone 15 times — all on a single charge. And equipped with the same electrical outlet you’ll find in a wall, you can even use the Yeti to run household electrical devices like a lamp — though they’ll likely eat up the battery faster than you think.

Motorola Talkabout MT350R: A less expensive and less far-reaching alternative to the Delorme satellite communicator, these two-way radios are equally effective at reaching people in nearby areas. With up to 35 miles of reach (from mountain to valley, though only two miles of signal strength in neighborhood settings), this pair of weatherproof radios can keep in contact with one other — and put you in touch with rescue personnel. Dust and splash-proof, the radios also come with mini-USB connectors, letting them power up using a portable cell phone battery. Extra battery packs, meanwhile, make sure you don’t go radio silent.

Survive Outdoors Longer Escape Divvy: Small enough to fit in the palm of your hand, but large enough to envelope you in warmth, this ultra-light, 8.5-ounce emergency sleeping bag reflects your body heat back at you, while simultaneously breathing out condensation. The result: a warm and dry place to catch some rest. With a wind- and waterproof exterior (including the seams) and a drawstring hood, it has the creature comforts of a high-tech sleeping bag, but costing just $50, it won’t set you back as much as some of the more expensive gear on the market, making it an ideal throw-in for an emergency survival kit.

Survive Outdoors Longer Origin: If MacGyver had a toolkit, it would look exactly like this $40 setup. On the waterproof case’s exterior, a signal mirror, compass, one-handed sparker, and a folding knife (with LED light) keep vitals at the ready. Meanwhile on the inside, you’ll find nylon cord, Tinder-Quik frustraters, emergency sewing and fishing gear, stainless steel wire, and a manual with more than 60 survival tips sitting dry and ready to save a life. But wait — where’s the whistle? Cleverly hidden in the handle of the knife, it can be hard to miss, but it’s never out of arm’s reach.

Volcano 3 Collapsible Grill: Building a campfire in storm-ravaged terrain can be more than a hassle — it can be a life-or-death struggle. This $159 portable cooker can use a variety of fuels to keep you warm and well-fed, making it ideal for everything from tailgating to camping. With a 13-inch diameter, the collapsable stove can support a dutch oven to keep water at a boil and has a grill grate for cooking directly over the flame. But the big draw to this device is how it can use propane, charcoal, or wood to fuel your fire. Then, whether you put a wok, a fry pan, or even a smoker on top, you can prepare food just as you would if you were still in your kitchen. 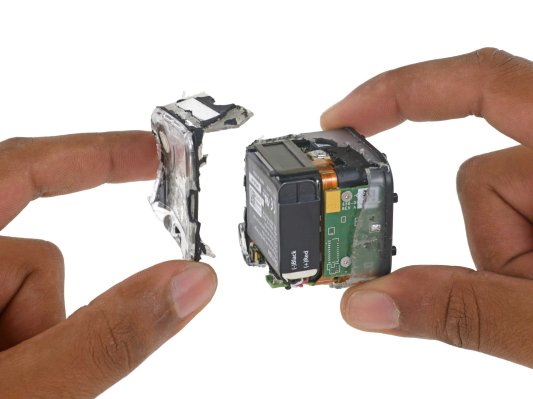 See What's Inside the GoPro HERO4 Session
Next Up: Editor's Pick