Why I Donated Fetal Tissue After My Abortion

Nine years ago, my husband and I were newlyweds, eager to start our family right away. We figured, why wait? So I started taking prenatal vitamins and folic acid. I made sure I was eating right and doing all the things you’re supposed to do to ensure a healthy pregnancy. When I became pregnant after two months, we were overjoyed.

Eighteen and a half weeks into the pregnancy, I had an ultrasound. Even I could see on the screen that something was wrong. It looked like there was a hole in my daughter’s back. The technician and genetic counselor in the room got real quiet. It turned out that our daughter had myriad problems, including spina bifida and a tethered spinal cord. We didn’t want to rush into such an important decision, but we did eventually decide we wanted to end the pregnancy. Then, we had to wait for an available appointment. We had an abortion at 22 weeks.

It was the right decision for us as a family. It was a decision we made with our doctor — which is how it should be. When lawmakers try to ban abortion after 20 weeks, or restrict access in any way, I know that they just don’t get it. It’s not their right to make this decision for anyone else. Unless someone has been through an experience like mine personally, they really have no idea what it is like, and no idea what they would do in our shoes.

It was horrible for us to have to end a much-wanted pregnancy, but we made the best of it by donating the fetal tissue for research. We contacted our genetics counselor, who coordinated the donation with a spina bifida research project funded by the National Institutes of Health. We figured that donating the tissue could perhaps spare other families the painful situation we found ourselves in. It was clear to me and my husband that the question of what caused the spina bifida needed to be studied.

I feel fortunate that I had the chance to donate the tissue — I was able to turn my pain into something that could benefit someone else.

I want people who are politicizing the option to donate fetal tissue to think about the implications of removing this option. I want them to think about people suffering from diseases such as Alzheimer’s, Parkinson’s, ALS and sickle cell disease — and to consider those people’s family members who no doubt want their loved ones to live longer, fuller lives.

Why would anyone want to destroy the chance to save another person’s life?

Recently, a group began releasing secretly taped videos of Planned Parenthood employees, in which doctors discuss fetal-tissue donations for research purposes. After the videos became public, I decided to advocate for Planned Parenthood by telling my story, so people can understand why fetal-tissue research is a good and important act. (It is also a legal act.)

I’m concerned that as a result of the current ongoing attack against the organization for making fetal tissue available for scientific research, anti-abortion-rights lawmakers will try to defund what is an incredibly important healthcare organization. Republican presidential candidate and Kentucky Senator Rand Paul has said he will push a vote to cut funding. His fellow candidate Texas Senator Ted Cruz has also called for defunding, and an investigation into Planned Parenthood. Other prominent Republicans, including Jeb Bush, Scott Walker and Rick Perry have made similar statements.

Defunding Planned Parenthood would be a huge mistake. It would mean taking healthcare away from millions of women like me who rely on Planned Parenthood for birth control, Pap smears, breast and cervical cancer screenings, STI diagnosis and treatment, sex education and — yes — abortion. It would mean going backward, not forward, with scientific research that benefits society at large.

After my abortion, I was able to become pregnant again. I gave birth to a healthy son, who’s now eight years old. I am grateful that I was able to make my own decision about my reproductive health, and plan my family so that my son can grow up with the resources that every child needs. And I will continue to fight to make sure that these rights are not taken away from me and other women. 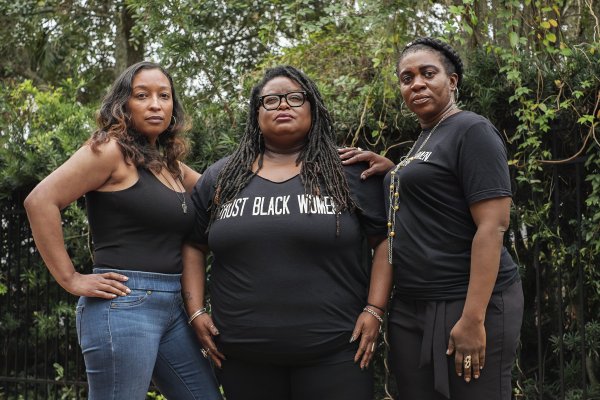 'We Are Grabbing Our Own Microphones': How Advocates of Reproductive Justice Stepped Into the Spotlight
Next Up: Editor's Pick