Obama Arrives in Ethiopia, a Favored Ally In Spite of Human Rights Abuses

A massive car bomb ripped through the façade of a major international hotel in Mogadishu on Sunday, killing 13 in a tragic reminder of why, exactly, President Barack Obama is visiting Somalia’s autocratic neighbor Ethiopia — this despite having said, upon his first presidential visit to the continent in 2009, that “Africa doesn’t need strongmen, it needs strong institutions.”

Ethiopia’s powerful military has been a vital bulwark against the al-Qaeda-affiliated al-Shabaab insurgent group in Somalia, which was responsible for Sunday’s bombing in Mogadishu. But the American need for security support in an unstable East Africa comes at a cost. Despite a history of jailing journalists and holding elections widely derided as a sham — the most recent parliamentary election, in May, resulted in 100% of the seats going to the governing party — Ethiopia can now claim the de facto stamp of approval that comes with an American Presidential visit.

On the morning of July 27, Ethiopian Prime Minister Hailemariam Desalegn welcomed Obama into Addis Ababa’s National Palace with the pomp and glory of an ancient empire that, unlike much of Africa, was not colonized by a European power until 1936. A large brass band, decked out in the red and green of the Ethiopian flag, played The Star-Spangled Banner and the Ethiopian national anthem as Obama and Desalegn stood at attention. Stone lions stood atop the palace portico; real ones roamed the palace’s back garden, reminders of Ethiopia’s former emperor, Haile Selassie, who took the lion as his symbol. (Obama later visited the palace lions, and joked, in a press conference, that he was “considering getting some for the White House.”) As cannons fired off a 21-gun salute, Obama inspected troops from the Ethiopian national guard in a bit of state visit formality that appeared to bore him. Then he and Desalegn entered the palace for several hours of closed-door discussions on regional security, economic development and human rights.

For many Westerners, Ethiopia still conjures up images of starvation and desperate poverty, a product of a horrific famine during the 1980s. But today Ethiopia is the second most populous state in Africa, with some 90 million people, and it has become a regional military and economic powerhouse, averaging ten percent growth over the past decade. It is home to the African Union — another reason for Obama’s visit — and is about halfway through building the Grand Ethiopian Renaissance Dam which, when completed in 2017, will be the largest hydroelectric power project in Africa.

But that success on the African stage has come at a cost to civil liberties and democratic ideals. Described by the Committee to Protect Journalists as the second largest African jailer of journalists, after Eritrea, the government has detained at least nine reporters and bloggers critical of the ruling party; five were released in the weeks leading up to Obama’s visit. Prime Minister Desalegn justified the detentions in a press conference after the talks by insinuating that the journalists were unethical and aligned with terrorist groups. Both Amnesty International and Human Rights Watch have lambasted the Ethiopian government for its abysmal record on human rights, noting that members of the political opposition are regularly accused and detained on charges of terrorism. Obama, in the same press conference, said that U.S. intelligence had seen no indication that the opposition groups of most concern to the government posed a terrorist threat. “If they tip into activities that are violent and are undermining a constitutional government, then we have a concern,” he said. A vocal opposition, he added, should be seen not as a threat, but as an essential part of any functioning democracy.

But Ethiopia, bordered by the violent and faltering states Sudan, South Sudan and Somalia, is also a bastion of security in a region roiled by war. It has, in the past, hosted a secretive American drone base, but it is unclear whether the U.S. is currently conducting drone operations from the area. Ethiopia is second only to Bangladesh as the largest contributor of peacekeeping troops to the United Nations, one of the largest contributors of troops to the African Union, and has one of the strongest militaries on the continent. As such, it is a country that cannot be easily dismissed — even with its spotty record on human rights.

Pressed on whether Obama’s visit to Ethiopia was consistent with American ideals of democratic freedoms and human rights, Rhodes told journalists that despite the differences between the two countries, it was more important to remain engaged. “We have a broad set of interests with the Ethiopian government that includes a commitment to raise these issues, because ultimately we believe that democracies are going to be more successful if you’re looking at promoting economic growth, economic dynamism, in combating security threats.” He went on to compare the Ethiopia visit to other presidential trips to China. “The fact of the matter is, if we only went to countries around the world who agreed with us about everything, we’d have a very short travel itinerary.”

Later in the day Obama will convene a meeting with regional leaders about the devastating civil war in South Sudan. He will be joined by Desalegn, the presidents of Kenya and Uganda, the chairwoman of the African Union and the south Sudanese foreign minister. Despite the high-powered attendees, one senior Obama administration official admitted to journalists, speaking on background per White House protocol, traveling with Obama that a positive outcome on South Sudan was unlikely. “I don’t think anybody should have high expectations that this is going to yield a breakthrough. The parties have shown themselves to be utterly indifferent to their country and their people, and that is a hard thing to rectify.”

Obama, speaking to the press, lamented that “The conditions on the ground are getting much, much worse.” And that “we don’t have a lot of time to wait.” Fighting in South Sudan has meant that farmers have not been able to plant vital crops for two seasons in a row, and the country is on the verge of famine – one caused not by drought, but by war. In order to solve the South Sudan crisis, Obama needs the help of Ethiopia, along with many other African nations with questionable human rights records. It’s not that human rights are being held hostage to security needs, Obama argues, so much that visiting a country like Ethiopia gives him the opportunity to help solve a thorny regional problem while pushing for democratic progress on the sidelines. Which works first may yet define the success of his trip. 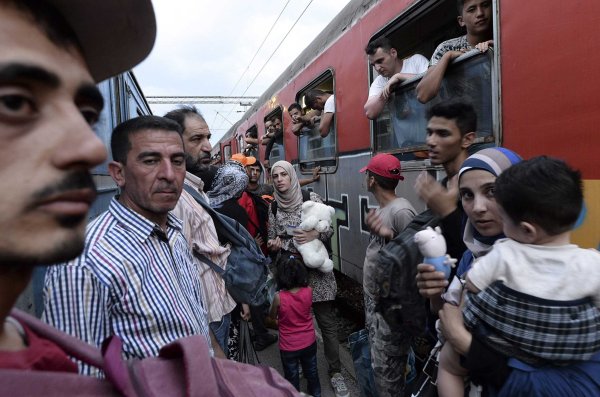 Property Mogul Wants to Create New Country For Refugees to Solve the Migrant Crisis
Next Up: Editor's Pick