Chris Froome of Great Britain and Team Sky (yellow jersey) leads Peter Sagan of Slovakia and Tinkoff-Saxo during stage twenty one of the 2015 Tour de France in Paris on July 26, 2015.
Jean Catuffe—Getty Images
By Tara John

British cyclist Chris Froome’s win at this year’s Tour de France has been marred by suggestions of doping by a French scientist.

Pierre Sallet, a physiologist who heads the anti-doping agency Athletes for Transparency, first raised suspicions when he alleged that Froome’s performance in stage 10 of the race was abnormal. Froome won the stage and gained a time advantage over his rivals that they could not overcome in the remainder of the race.

Froome won his second Tour de France in three years on Sunday after three week’s of racing that culminated with a late fight-back by the Colombian Nairo Quintana. Just as when Froome first won in 2013, Quintana was runner-up, although the margin was much smaller this time.

Sallet told the BBC on Monday that despite having no physical evidence, what he estimated from Froome’s power-to-weight ratio showed an “abnormal profile.” But, he said he would would need more details, like Froome’s neurological profile and power outputs, to be sure.

“So to understand if it’s a unique profile or if it’s something else like doping, we need more details to understand,” said Sallet. “When people are suspicious around you, it’s my opinion, but the best answer is to give the details.”

Cyclists have been regarded with suspicion since the 7-time Tour de France winner Lance Armstrong admitted doping and was stripped of his titles. Froome, the winner of the Tour in 2013, has been abused by spectators during the race who have spat, made hand gestures and on one occasion threw urine at him. There is no evidence that he has engaged in doping and he denies it.

In an effort to satisfy critics, Froome’s team released their scientific data about the cyclist during the tenth stage.

Brian Cookson, the president of the Union Cycliste Internationale (UCI), rejected Sallet’s scepticism. “I don’t accept that argument… clearly what sport is about is about exceptional performances from individuals who put up something incredible on the day for whatever reason, motivation, accident of nature, genetics and so on, ” Cookson told the BBC. “To suddenly say that everybody who puts up an exceptional performance must therefore be doping because other people did in the past, that’s a rather strange leap of faith to make.”

Cookson also told the BBC that he thought that Froome’s treatment by some spectators was “digusting and disgraceful” and individuals like Sallet shared responsibility for that. “I think they are making rather disingenuous justifications for their claims and frankly all they have been doing is damaging our sport and perhaps individuals within that sport,” he said.

To the amusement of many, Lance Armstrong shared his thoughts on Froome’s performance. 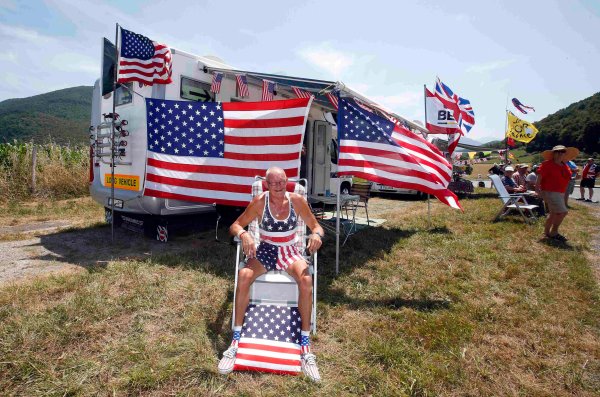 See the Crazy Fans of the Tour de France
Next Up: Editor's Pick