Only some 100 tigers currently roam the Sundarban forests of Bangladesh, a new survey has discovered, indicating far fewer big cats than previously thought in one of their largest global habitats.

The yearlong survey that ended in April was based on footage from hidden cameras and found the true number of tigers to be between 83 and 130, Agence France-Presse reported.

“So plus or minus we have around 106 tigers in our parts of the Sundarbans,” Tapan Kumar Dey, the Bangladesh government’s wildlife conservator, told AFP. “It’s a more accurate figure.”

The number represents a precipitous drop from the 440 figure included in the last tiger census in 2004, although experts say in hindsight the earlier calculation may have been inaccurate since it was based on a study of the animals’ paw prints or pugmarks.

The news from Bangladesh is in contrast to South Asian neighbor India — home to about 70% of the global tiger population — where the Environment Ministry said in January that the number of tigers had risen to 2,226 from 1,411 in 2008. There are apparently 74 tigers on the Indian side of the Sundarbans, the mangrove forest that stretches for nearly 4,000 miles across both countries.

Monirul Khan, a zoology professor at Bangladesh’s Jahangirnagar University and the country’s foremost expert on tigers, stressed that the government needs to intervene in order to protect the animals from poaching and their habitat from destruction through development.

The number of wild tigers worldwide is currently estimated at just 3,200 compared to 100,000 in 1900, and WWF says they are in danger of soon becoming extinct. 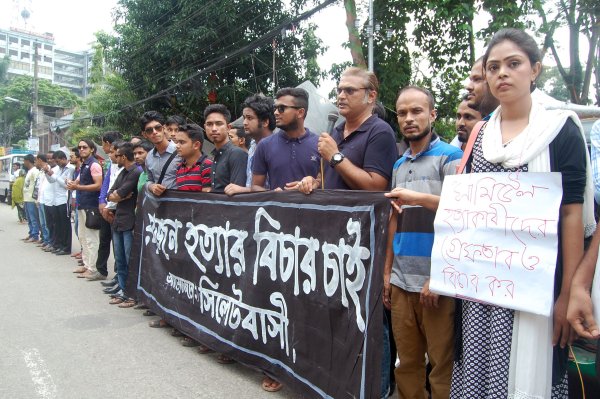 Hundreds in Bangladesh Protest Killing of Teenage Boy
Next Up: Editor's Pick