As Kaylee Goemans sat in an emergency room with her 6-week-old baby, the last thing she wanted to worry about was an empty parking meter.

Thanks to a slew of mothers on Facebook, she didn’t have to.

Goemans, 27, rushed her son Dominic to a hospital in Barrie, Ontario, with intestinal issues on July 13, according to CBS News Toronto.

Unable to afford the hospital’s $15 parking fee, the mother of three poured four hours worth of change into a parking meter, thinking the hospital visit would be quick, TODAY reports.

The hospital stay lasted longer than she expected. Goemans didn’t want to leave her newborn, but worried that her car would be towed or ticketed. So she posted to a local Facebook group for help.

“Women just started pouring in, asking what car I drove and where I was parked to put change in for me, ” Goemans told TODAY.

In just a few hours, five women went to the woman’s car and fed the meter.

One Facebook user commented on the mother’s post, writing, “2 more hours added no need to worry about that. Give baby a hug from me,” according to TODAY.

Additionally, the post received 100 comments from people looking to encourage or help the woman. 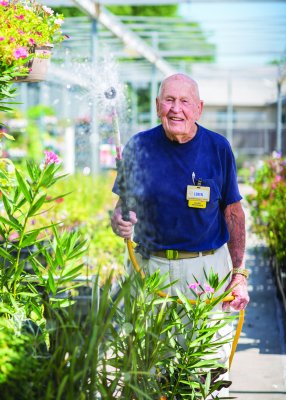 Walmart Employee to Celebrate 103rd Birthday
Next Up: Editor's Pick