Federal officials have requested an investigation into a potential compromise of classified information related to the handling of documents once stored on former Secretary of State Hillary Clinton’s private email server, government officials confirmed Friday.

A Department of Justice official confirmed to TIME Friday morning that there had been a “criminal referral.” Later that same day, the official sent an updated statement: “The Department has received a referral related to the potential compromise of classified information. It is not a criminal referral,” it read.

Even if Clinton is not targeted in the probe, a Justice Department inquiry could be used to tar her presidential campaign. Her decision to use a private account for government business, and then choosing to delete ostensibly personal information from the server has already contributed to a decline in Clinton’s favorability rating and has provoked questions about her trustworthiness.

I. Charles McCullough III, the inspector general for the intelligence community, voiced concerns in a July 23 memo over information that passed through Clinton’s email server, was later given to her personal lawyer and returned to the State Department. McCullough said the data should have been treated with greater sensitivity, since it was derived from classified information produced by the U.S. intelligence community.

Clinton has repeatedly said she never allowed information that was marked classified to pass across her private email. “There have been a lot of inaccuracies,” she said on Friday of the latest reports. “Maybe the heat is getting to everybody. We all have a responsibility to get this right. I have released 55,000 pages of emails, I have said repeatedly that I will answer questions before the House Committee. We are all accountable to the American people to get the facts right, and I will do my part.”

None of the investigating bodies, in Congress or elsewhere, have accused Clinton of wrongdoing. But questions have been raised about the judgement of State Department officials. “We note that none of the emails we reviewed had classification or dissemination markings, but some included [intelligence community]-derived classified information and should have been handled as classified, appropriately marked, and transmitted via a secure network,” wrote McCullough, the inspector general for the intelligence community, who described his review as incomplete.

A spokeswoman for McCullough, Andrea Williams, said Friday that there are at least four emails of concern, which have yet to be released by the State Department under the Freedom of Information Act. “They were not marked at all but contained classified information,” she wrote in an email to TIME Friday.

If documents had not initially been marked as classified, agency heads generally have significant legal leeway to decide how to classify most information, with the exception of some categories, like nuclear secrets, which are deemed classified by statute.

“The thing to understand about the classification system is that it is an administrative decision that is rooted in executive order,” said Steven Aftergood, a government secrecy expert at the Federation of American Sciences. “The president delegates authority to agency heads. It’s up to an agency head to decide if something is properly classified or not.”

The request for an investigation, first reported by the New York Times, is in reference to “hundreds of potentially classified emails” contained among Clinton’s messages.

Rep. Elijah Cummings, the ranking Democrat on the House committee investigating Benghazi, denied Friday that there was any criminal referral. “I spoke personally to the State Department inspector general on Thursday, and he said he never asked the Justice Department to launch a criminal investigation of Secretary Clinton’s email usage,” Cummings wrote in a statement. “This is the latest example in a series of inaccurate leaks to generate false front-page headlines − only to be corrected later − and they have absolutely nothing to do with the attacks in Benghazi or protecting our diplomatic corps overseas.”

In May, when releasing the first batch of Clinton emails to the public, the State Department, at the request of the intelligence community, classified 23 words of an email relating to the arrest of a suspected assailant in the 2012 Benghazi attack which killed four Americans.

A senior State Department official told TIME then that the retroactive classification does not mean Clinton did anything improper, adding “this happens several times a month” when Freedom of Information Act reports are prepared for the public. The executive order under which the classification program operates allows for the reclassification of information, either because of initial misclassification or because subsequent events have made the information more sensitive.

At the time, the State Department said, the email was unclassified while it resided on Clinton’s server and when it was sent to the House Select Committee on Benghazi. McCullough, the inspector general, told Congress that he believes copies of the emails were also placed on a thumb drive that was given to David Kendall, Clinton’s personal attorney at Williams and Connelly.

In a statement, Clinton spokesman Nick Merrill brushed back on the assertion that Clinton had done anything wrong, noting that the New York Times had also changed the language of its initial story. At first, the Times described “a criminal investigation into whether Hillary Rodham Clinton mishandled sensitive government information.” That was changed to “a criminal investigation into whether sensitive government information was mishandled in connection with the personal email account Hillary Rodham Clinton.”

“Contrary to the initial story, which has already been significantly revised, she followed appropriate practices in dealing with classified materials,” Merrill said. “As has been reported on multiple occasions, any released emails deemed classified by the administration have been done so after the fact, and not at the time they were transmitted.”

In a statement Friday, Speaker of the House John Boehner criticized Clinton for “mishandling” classified email, though it is not yet clear whether that claim is a part of the potential Justice Department probe. He encouraged Clinton to turn over her private server to Congress for further investigation.

“Secretary Clinton has repeatedly claimed that the work-related emails on her private home server did not include classified information, but we know that is not true,” Boehner said. “She has claimed she is well-aware of what matters are classified and what are not, and yet she set up a personal email server to discuss matters of national security despite guidance to the contrary from both her State Department and the White House. Her poor [judgment] has undermined our national security and it is time for her to finally do the right thing.”

The State Department is in the midst of a review of 55,000 pages of emails from Clinton’s server, and is under court order to produce them regularly to the public in order to comply with overdue Freedom of Information Act requests.

The inspectors general of both the State Department and the intelligence community have asked the State Department to review the Clinton emails in a more highly classified environment, “given it is more likely than not” that such records exist in her messages. The department has declined, citing resource constraints.

In her public comments on the server issue, Clinton has at times been less than forthright, telling CNN earlier this month that she hadn’t received a subpoena for the records, for instance, when she had.

“The truth is everything I did was permitted and I went above and beyond what anybody could have expected in making sure that if the State Department didn’t capture something, I made a real effort to get it to them,” Clinton told CNN this month. But Clinton was under a legal obligation to preserve all messages pertaining to her work and to hand them over to the State Department. 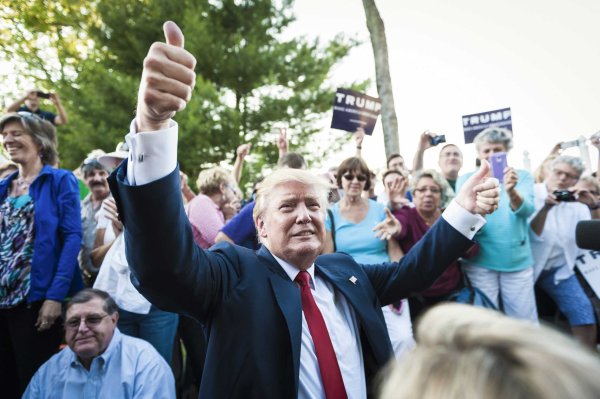 Watch Donald Trump's Most Outrageous Moments
Next Up: Editor's Pick