The Danger of a Celebrity President

Once upon a time in America, it was believed that the president of the United States should have the gravitas and proper sense of priorities to distance himself from the triviality of showbiz. Then along came television, and Nixon poked fun at himself onLaugh-In, Clinton played blues sax on The Arsenio Hall Show, and Obama slow-jammed the news with Jimmy Fallon. Now anyone who aspires to occupy the White House is expected to show that he or she is just as comfortable hanging with celebs as mingling with heads of state. Welcome to the era of the pop culture presidency.

In his recent book Celebrity in Chief: A History of the Presidents and the Culture of Stardom, presidential historian Kenneth T. Walsh argues that celebrity is an indispensable part of the modern presidency, and that presidents who handle celebrity better are more successful. While what constitutes “successful” is arguable, it’s true that a comfortable engagement with pop culture has become an important selling point for presidential candidates.

Walsh’s book was reviewed recently by Tevi Troy, who traced the interaction (or lack thereof) between our presidents and the pop culture of their time in his own book on the topic, What Jefferson Read, Ike Watched, and Obama Tweeted: 200 Years of Popular Culture in the White House. Troy argues that pop culture is the most influential arena in which to connect with the American people—especially the politically coveted younger generations—and for capturing their imaginations. For example,

There is an obvious political advantage for the president or candidate who not only has his finger on the pulse of the culture, but who can manipulate it through the gravitational pull of his own charm and charisma.

Troy believes that presidents who distance themselves from pop culture and focus on reading can show a seriousness of purpose that some voters appreciate. But the truth is that Americans have a healthy suspicion of bookish intellectuals as leaders—and rightly so. Leadership is primarily about vision and charisma, not intellect. Throughout our history it’s been more important to Americans for our presidents to have the common touch than to be well read or well educated, and today that means a president who understands pop culture.

And no president understands it like Barack Obama, a man “shaped by popular culture more thoroughly than any other president in our history,” says Troy. Obama has won two elections in no small measure because of his shrewd understanding of, and what Walsh calls “his constant and unusual” engagement with, pop culture. He chats on late night talk shows, hangs with Jay Z and Beyoncé, and jets out to Hollywood periodically for fundraisers. He has successfully appropriated the hipness of movie stars and rappers, and raised the bar of presidential cool to heights Bill Clinton could only dream of.

Is that a problem? What’s wrong with a president who “gets” young people, who is relatable and cool? In an era in which singer Bono is out there doing the work of a world leader himself, why install some boring old fart in the White House who probably doesn’t even listen to U2?

The harm is not in having a president with personality and a sense of humor, and it’s perfectly understandable that he or she would take advantage of the platforms pop culture offers to reach voters, including the vast swath of the American public that might not otherwise pay attention to politics.

The danger is that a president who takes time out to trade comic barbs with Zack Galifianakis on Funny or Die, or be interviewed by a YouTube star best-known for bathing in Fruit Loops, not only diminishes the dignity of the presidency but unwisely gives both our allies and our enemies the impression that the American people and the Leader of the Free World are fundamentally unserious.

The danger comes when voters are seduced into the orbit of a leader or candidate not because of his or her character and positions on the issues, but because of a shallow aura of cool.

The danger comes when a president becomes a personality more outsized than the office of the Presidency itself, when he or she not only hangs with celebs, but becomes one.

We live in dangerous times. Nothing would make them worse quite like an American Ppresident empowered not by the trust and respect of what Jefferson called an informed electorate, but by a corrupting cult of celebrity.

This article originally appeared on Acculturated 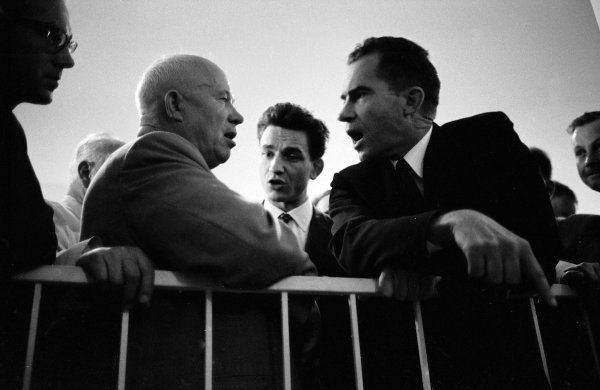 When Khrushchev Said No to Pepsi but Yes to Peace
Next Up: Editor's Pick