Everything We Know About the Lafayette Movie Theater Shooter

The man who opened fire on a crowded movie theater in Lafayette, La. Thursday night had a history of erratic and violent behavior, prompting his family to request a protective order against him several years ago.

John Russel Houser, 59, also known as “Rusty” killed two people and himself and injured nine others when he fired his handgun at least 13 times at a showing of Trainwreck, the Amy Schumer comedy.

In a press conference Friday, Lafayette Police Chief Jim Craft said Houser was “kind of a drifter” who had been living in a motel since the beginning of July and apparently did not have close ties to the city, according to NOLA.com. Originally from Phenix City, Ala., Houser was estranged from his family. His only connection to Lafayette was a dead uncle who lived there years ago.

According to documents obtained by the Associated Press, Houser’s family asked for a temporary protective order against him in 2008, because of his “extreme erratic behavior” and “ominous as well as disturbing statements.” The documents say that Houser had committed “various acts of family violence” and that his wife, Kellie Houser, was so worried that she “removed all guns and/or weapons from their marital residence.” The documents also note that Houser has a history of bipolar disorder.

Authorities announced at a press conference Friday that Houser had had numerous other brushes with the law, but was never formally charged with a serious crime. He was arrested for arson in 1989 or 1990, and his wife filed a domestic violence complaint against him in 2005, but he was never formally arrested. In 2014, he allegedly destroyed his own house after he sold it to another man– when the new owner attempted to evict Houser from the property, he “booby trapped” the home, preparing for an enormous gas fire. The police also confirmed Houser’s long history of mental illness.

Houser shot himself in the theater Thursday night as he saw police officers approach, but had apparently intended to escape the scene—Craft said police found wigs and other disguises in his motel room, and that Houser had switched his license plates in an apparent attempt to evade capture. He had a small criminal record, but hadn’t run into trouble with the law in the past decade or so (he had previously been arrested for arson and selling alcohol to a minor).

Witnesses said Houser did not appear agitated, and did not say anything during the shooting that would indicate a motive. “He wasn’t erratic or nervous. Just walking down the aisle randomly firing,” Josh Doggett, who was at the movie with his fiancee, told NBC.

A LinkedIn page registered in Houser’s name and carrying his picture shows a checkered professional history. According to the page, Houser dabbled in real estate development, and owned two bars: Peachtree Pub in Columbus, Ga. from 1979-1980, and Rusty’s Buckhead Pub in Lagrange, Ga. from 1998-2000. He also appeared several times as a guest on a radio show in 1993, but host Doug Kellet posted on Facebook that he doesn’t remember him. 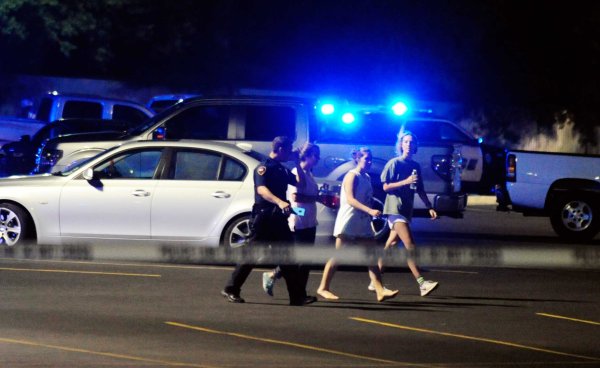 Louisiana Shooting Victims Named By Police
Next Up: Editor's Pick