The June 1993 gathering was at the home of then-House Budget Committee ranking member John Kasich, the same man who announced his campaign as a 2016 presidential candidate for a Republican Party still furious about a healthcare reform bill by President Obama that drew heavily on the work of Clinton from the early 1990s.

At the time, Kasich was developing his own national health insurance proposal, which offered a more marketplace-based solution than what emerged in Obamacare. The Kasich plan would have covered all Americans by 2005, using a form of an individual mandate that would have required employees to purchase insurance through their employers. (The mandate was an idea initially supported by conservative groups like the Heritage Foundation.)

In his announcement speech this week, Kasich referred to his work on health issues in the 1990s. “I went on to chair the Health Committee where I learned to work across the aisle because the House was run by Democrats,” Kasich said of his time working in the State Senate. “And that’s where I learned that policy is far more important than politics, ideology, or any of the other nonsense we see.”

In 1993, the bipartisan outreach included the dinner with Clinton and nine fellow Republicans. Afterwards, Kasich declared Clinton had been “a big hit,” with the crowd.

A contemporaneous memo released last year by the Clinton Library provides more insight into the meeting, and Kasich’s role in the healthcare reform effort.

After the dinner, “Congressman Kaslch, has been quite complimentary about you, personally, and the Administration’s consultative and outreach process for health reform,” Clinton aide Chris Jennings wrote to Hillary Clinton in a memo.

Before a follow-up meeting two weeks after the dinner, Jennings pegged Kasich as a strong target for administration outreach. “Kasich, given his reputation as a smart and serious legislator, can be very helpful With mainstream Republicans,” Jennings wrote. “In addition, he seems to have gained the respect of the media so his supportive comments about you and the process can have a positive impact externally on public perception, as well.”

“Even if he ultimately opposes the plan,” Jennings concluded, “his positive feeling toward you and the process may mute his criticism and moderate the Republican opposition effort.”

In 1993, before the Clinton meetings, Kasich released a report on healthcare that amounted to a “rather stereotypical conservative position on health reform,” in Jennings’ words, including means-testing Medicare, increasing co-payments, and using private healthcare savings accounts. But, he added, “it also includes a number of suggestions that are consistent with the direction the Administration has been heading including: Developing incentives for greater use of competition in the Medicare and Medicaid programs, providing flexibility/waiver authority to the states, reducing health care fraud, assuring Insurance portability, establishing purchasing groups, and addressing the medical liability problem.”

A year later, Kasich introduced a plan that would have provided health insurance to all Americans by 2005, requiring them to purchase insurance through their employers on the private market, with government subsidies helping those below or near the federal poverty line. Small businesses and individuals would have been able to join “voluntary alliances” to purchase insurance as a pool. It also ensured that those with pre-existing conditions could get coverage.

Kasich aides said the meeting with Clinton is an example of his willingness to create connections with all sides, including those he disagrees with. “They certainly didn’t agree, but that didn’t keep him from wanting them to engage in converation,” said Kasich spokesman Scott Milburn.

Ultimately, Hillary Clinton’s effort was doomed to failure—though some of its proposals found a home later in the Affordable Care Act.

Many of Kasich’s own ideas for the era were gathered into the Affordable Care Act as well, though Kasich takes issue with their implementation. He has long called for ensuring that all Americans have health care insurance, but, in line with his party’s thinking about the healthcare law, has said he would sign a repeal of the bill.

“He wants to see people cared for, and he wants a competitive free market approach to do it,” Milburn said.

Aides point to Kasich’s turn to expanding managed care healthcare plans in Ohio, which has halved the rate of cost growth, as an example of the types of reforms he is looking to expand nationally.

Kasich frequently defends his decision to expand Medicaid on the campaign trail, tying it to his broader message of compassionate conservatism, arguing that those facing drug addiction, mental illness, and other difficulties should be cared for.

“I’m not for Obamacare.” Kasich told Bloomberg in April. “I have expanded Medicaid, because I wanted to bring Ohio dollars back to Ohio. We’ve been able to apply it to bring significant change, and our ultimate goal is that so all of these people who have been hurt can be in a position to get on their feet and move forward.” 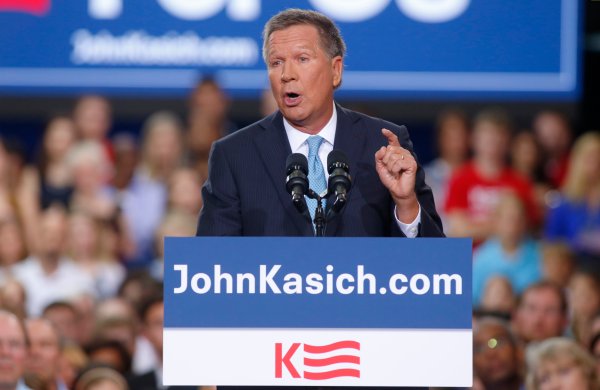