When she died of consumption at age 30, Emily Brontë believed her only novel had been a failure. Born on this day, July 30, in 1818, the middle of the three literary Brontë sisters only survived long enough to read the early, negative reviews of Wuthering Heights — of which there were many.

“How a human being could have attempted such a book as the present without committing suicide before he had finished a dozen chapters, is a mystery,” opined the Philadelphia-based Graham’s Magazine in 1848, the year after the novel’s publication. “It is a compound of vulgar depravity and unnatural horrors.”

Of course, the tide of public opinion soon turned, and Wuthering Heights became a classic — one that has only grown more popular, it seems, as the years have passed. Here are a few of the gothic love story’s many adaptations that enjoyed the critical success Emily Brontë never knew:

The Film. Laurence Olivier was a reluctant Heathcliff in Samuel Goldwyn’s 1939 movie — although only because he preferred the purer art of theater. He complained during filming that “he dislikes working for the movies and only does it for money,” according to TIME. Begrudgingly, he pulled off a brilliant performance all the same: “a speaking tribute to the efficacy of the profit motive,” per TIME. Detailing Goldwyn’s efforts to achieve authenticity, TIME added that he:

The Opera. While Carlisle Floyd had some criticism of his own for the novel — “I realized it’s very badly written; I could use almost no Brontë dialogue,” TIME quotes the composer as saying in 1958 — his operatic adaptation of Wuthering Heights in Santa Fe won over some influential critics, including a Metropolitan Opera Board Member, who said, “This puts the Met to shame.” (Not everyone shared his high opinion. Per TIME: “‘I liked the movie better,’ said one mink-draped woman.”)

The MTV Musical. Reviewers didn’t love this 2003 version, which turned the brooding Heathcliff into a literal rock star. Still, the critics went easier on MTV than they had on Emily Brontë two centuries earlier. “Teenage girls may get a kick out of it, but for a broader audience it could and should have been better,” the New York Times concluded diplomatically.

The Action Figures. One of the best Brontë remakes was never actually made. A YouTube video of a fake commercial for Transformers-like action figures of Emily and her sisters — produced in 1998 as one in a series of educational shorts, although it never actually aired — shows the Brontë figures confronting the patriarchy with fake mustaches and boomerang books. When outnumbered, the trio combine to form the Brontesaurus, an all-powerful dinosaur equipped with “barrier-breaking feminist vision.”

The Novel, Re-issued, with a Vampire Boost. All it took was a nod from Bella to resurrect Emily Brontë’s masterpiece from the dead. After the heroine of the Twilight saga compared her feelings for Edward to Catherine’s love for Heathcliff, Wuthering Heights attracted a new generation of readers. Sales of the novel quadrupled, according to the Telegraph, after HarperCollins reissued it in 2009 with the tagline “Bella and Edward’s favorite book.”

Read more about Brontë from the TIME archives: More News of the Dark Foundling

Correction: The original version of this story misstated the year Wuthering Heights was published. It was 1847. 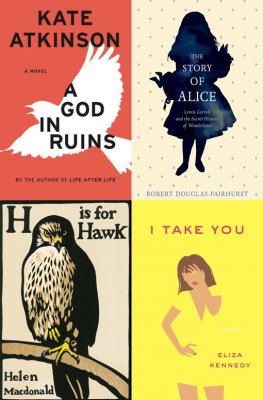 Here Are The Best Books Of 2015 So Far
Next Up: Editor's Pick