What the Toddler-Hating Diner Owner Teaches Us About Parenting

It’s a strange world when a person shouting at a child can make international news. But that’s what happened when the fed up proprietor of a Maine diner lost her temper with a screaming toddler.

The child’s parents, who have yet to step forward, took to social media to complain that they were having breakfast at Marcy’s Diner in Portland, Maine, when the “insane” proprietor shouted at their nearly 2-year-old child. The unrepentant owner then took to her own social media to say the parents had it coming, after ignoring their wailing offspring for 40 minutes, not feeding her the pancakes they ordered and disregarding the peace and quiet of other diners. [Update: the parents went public and pointed that it was raining, so they couldn’t take the kid outside.]

Since nobody can resist a story in which there are so many directions for fingers to point, the story quickly went national and international. Everybody had an opinion, none of it moderate.

The “Marcy’s Diner Incident” is a new iteration of an old problem, made worse by social media. Earlier versions involve wailing toddlers on airplanes, a crying baby on a bus and even a crying baby in church. The tension between the different ways we react to kids has even spawned a book and TV show: The Slap.

Turns out there are hard limits to the “It takes a village to raise a child” theory. It sounds lovely, but there are practical issues that have to be ironed out. Some people aren’t really very good at dealing with children, or have other legitimately more important things to do than nurture someone else’s kids.

Moreover, we live in an era of strong opinions about the most optimal way to bring up offspring. We even have names for our various parenting philosophies. And since “bad parenting” is the go-to reason given for many of society’s ills, the stakes are high. Mistakes feel like catastrophes rather than what they usually are, which is rounding errors.

So it’s not surprising that a lot of parents take umbrage when other humans attempt to casually raise their offspring. Partly because some people are inexperienced or because they were raised differently, so their efforts are somewhat ham-fisted, counterproductive or not in line with a parent’s chosen style. But also because, thanks to the twin specters of social media and Sigmund Freud, parents feel very judged, so they get defensive.

There is no real (humane) way to stop toddlers from having the occasional meltdown. At that age, they’re a bit like a cheap car alarm: their switch is easy to trip and the resulting siren is hard to shut off. And there is only one guaranteed cure for getting annoyed by it: having a kid. For non parents, a crying child on a plane will provoke feelings of rage. For people with a recent memory of parenting, that same crying child will provoke feelings of sympathy for the parent—and perhaps a little relief that it isn’t their problem this time.

It’s like a vaccination; once you’ve had kids, you’ve heard so much relentless crying, your brain has developed an immunity. That’s probably why the allegedly inattentive diner parents didn’t even hear what so vexed the diner owner.

So apart from segregating all parents away from non-parents in any enclosed environment, there’s nothing to do but cut each other a little slack. The proprietor might want to take it up with the parents instead of the kid next time. The parents might want to bring a little snack or simple toy to the diner, to keep the kid amused.

As for the kid, he or she is probably no worse for wear. Unless it was really scary, toddlers don’t have much of a memory. They’re a bit like social media that way. 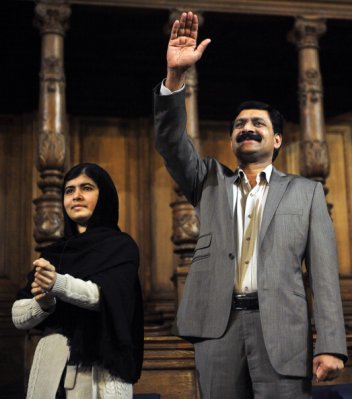 Malala's Dad: How I Raised a Nobel Peace Prize Winner
Next Up: Editor's Pick