A triumphant and unrepentant Donald Trump launched a barrage of personal attacks and name-calling on his campaign rivals Tuesday, most notably calling South Carolina Sen. Lindsey Graham an “idiot” and handing out Graham’s cell phone number to the whole world.

“What a stiff, what a stiff, Lindsey Graham. By the way he has registered zero in the polls,” Trump said, at an appearance in Bluffton, S.C. “A total lightweight. In the private sector, he couldn’t get a job.”

Earlier in the day, Graham called Trump a “jackass.” In response, Trump called Graham an “idiot” and held up a card that included Graham’s personal phone number, then asked his supporters to call Graham. “I don’t know, give it a shot,” he said.

Graham’s campaign manager, Christian Ferry, said in a statement that Trump “continues to show hourly that he is ill-prepared to be commander-in-chief.”

Trump’s rambling address found several other targets. “Bush said my tone is not right,” Trump said about another rival. “I said, ‘Tone, we need tone, we need enthusiasm, we need tone.'”

“I’m not a fan of Jeb Bush,” he went on. “Jeb bush is in favor of Common Core and he is weak on immigration. . . . Who would you rather have negotiating with China. Trump or Jeb? Or Trump or Hillary?” When he mentioned former Secretary of State Hillary Clinton, he waved his hand to pantomime her approach to diplomacy.

There were others that played the role of Trump targets, including the senior Senator from Arizona. “John McCain is totally about open borders and all of this stuff,” he continued, describing his anger against the Arizona senator who called some in Trump’s crowds “crazies.” “I know crazies. These are patriotic Americans.”

“The reason they are hitting me in all fairness,” Trump continued. “When you are registering zero in the polls, you’ve got nothing to lose.”

He repeated many of the central themes of his campaign, planning to change American leadership and make the country great. “If you can’t get rich dealing with politicians, there is probably something wrong with you,” he said. “These politicains they run and they run and they win and they lose. . . . They don’t do anything when the get there. I know better than anyone.”

Lindsey Graham is Getting a New Phone

The speech started and ended with bluster. “I don’t use tele-prompters,” he said, when he came out on stage. “I don’t like. They’re too easy.”

Read next: Like It or Not, Donald Trump Is News 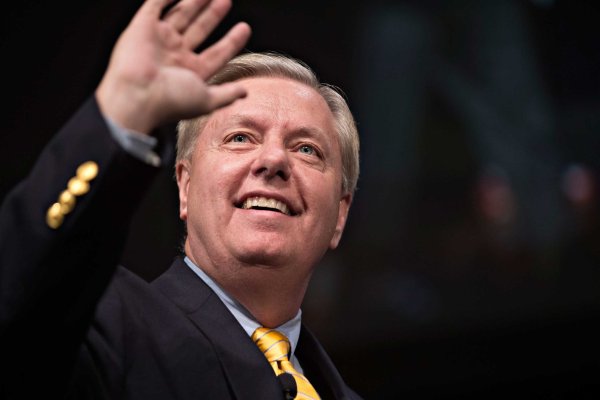 Lindsey Graham is Getting a New Phone
EDIT POST