At first glance, the four stars of a new Saudi television drama, “Mubta’ethat” or “Sponsored Women,” look a little mis-matched. There’s Salma, a chic tomboy with short hair and red lipstick, Raghad, a glam-girl with confident strides and princess curls, Sara, a feisty hijabi with colorful clothing, and Alia, a cautious girl who wears a black niqab (covering of the hair and entire face, with only slits for the eyes). But they have one thing in common: They’ve each got a U.S. visa page in their green passport. It is their golden ticket to leave their homes in Saudi Arabia to pursue an education in Philadelphia.

The show highlights how these Saudi women fluidly adapt to a Western world while maintaining their Eastern ideals. They enroll in English classes, move into their own apartments and learn how to drive a car. They all steer their own lives for the first time.

The script plays with the obvious contrasts inherent in the plot–the girls are almost as different from each other as their culture is from the one they’ll encounter in the United States. It manages to also dig into stereotypes about America or women in veils.

During the 30 episodes, the women are forced to identify with each other and confront their own biases. Their friendship can be compared to that of a certain all-female cult HBO show from the 90s. The now classic formula of bringing together very different girls with strong personalities and courageous adventures still works. This time, with a Saudi accent.

The program debuted on June 17, the first day of Ramadan, and was broadcast in Saudi Arabia every night through the Holy month which ended in mid-July.

The show enjoyed a steady viewership over the course of the month. Each night, the episode would be uploaded on YouTube after it airs, and the comment section would quickly populate. “These girls don’t represent any Saudi girl I know and I’m a sponsored student,” reads a comment. “This is an amazing series, can’t wait for the next episode,” reads another. The positive reviews seem to outweigh the negative ones. Since it is broadcast during the Holy Month, this revolutionary show is representing millennials in a way that Saudi TV hasn’t otherwise seen.

The show has an impressive pedigree: Directed by Oscar-nominated Saudi superstar, Haifaa Al Mansour and written by her sister, Noura Al Mansour, it was produced by Rotana Khalejia, a company that is partially owned by Saudi Prince Al Waleed Bin Talal.

The characters are from key parts of Saudi and represent different lifestyles and social temperaments. Surely, young girls in Saudi can identify with qualities found in every one of these women.

Each family reacts differently to the departure of their daughter to the faraway continent. And while each girl has at least one family member closely watching over them in Philadelphia, letting go is still nerve wrecking for the families.

In one comical scene, Alia’s mother is seen stealthily stuffing stacks of (imported) ramen noodles and sacks of rice into her daughter’s luggage before departing from Saudi. “They have that food in America!” her frustrated husband protests. “No! It’s laced with drugs there!” the exasperated mother replies. They are nervous about sending their only child, a daughter, to the unknown.

“It smells like freedom! Of course, it tastes like nicotine,” Salma, says on the phone, as she cautiously drags a puff from a cigarette upon arrival to Philadelphia, Pennsylvania. Despite being a few continents away, she maintains the Saudi fear of being seen smoking in public.

Actress Noor Al Badr who plays Salma, is a doctor in real life. She got “the randomest call” from Al Mansour who asked her to join the cast. Five days later, Al Badr was on the plane to Bahrain, where they shot most of the show.

“Of course, most people thought I was crazy. I was a doctor! According to most people in our society, acting is not something to be proud of. I think I’m the first Saudi girl to smoke on TV. I wanted to break the taboo,” Al Badr said.

No Saudi feminist show would be complete without the subject of the hijab. The irony is not lost on the characters. Two of the characters don’t cover their hair and two do. In one scene, Salma says of Alia, “She can see everyone but nobody can see her.” Alia, played by actress Zara Albaloshi, repeats how her covering is the ultimate feminist statement. Perhaps most surprising of all, Alia falls in love with a non-Muslim American, Jason, who lives in her building. He becomes interested in Islam and converts. By the end of the series, Alia, the girl who only reveals her eyes to the world, gives her heart to Jason.

The show’s U.S. location is also telling: Philadelphia is central to the American Dream. It is where the Founding Fathers signed the Declaration of Independence and the Constitution of the United States.

The women are in the U.S. on an academic scholarship, called the Saudi Scholarship. They are “sponsored,” hence the title of the show. Saudi Arabia has been funding Saudi students in the U.S. since 1960, but the late King Abdullah’s Scholarship Program, which launched a decade ago, was the largest push in encouraging female citizens to study abroad. In just five decades, Saudi girls went from not knowing how to read or write to a 97 percent literacy rate, according to UNICEF.

Although the image of Saudi women has changed over the generations, the outdated impressions haven’t yet caught up with reality. The show makes a point of addressing these issues.

“With 150,000 men and women studying abroad, why is Saudi considered to be a ‘developing country?’ In reality, it is quite developed,” Sara, played by actress Maram Abdulaziz, asks her classmates in one scene.

Actress Noura Assar’s character, Raghad, has her camera at the ready to document the trials and triumphs of her Saudi female friends. An aspiring actress and director, Raghad’s quiet rebellion comes in the form of selecting that area of study. There is no such industry in Saudi Arabia today.

Assar thinks the show is starting a different conversation. “I am proud to say that the image of Saudi women has come a long way from what it used to be; strong Saudi women always existed, however, the image was very much attached to a certain stereotype. The scholarships, I’d say, participated in this change due to the ‘face to face’ method of dealing with others, where people in other countries saw for themselves what these ladies can achieve and become,” she said.

“Just because we can’t drive doesn’t mean we can’t fly and reach for the stars. Hope the show will continue next Ramadan!” Al Badr said. 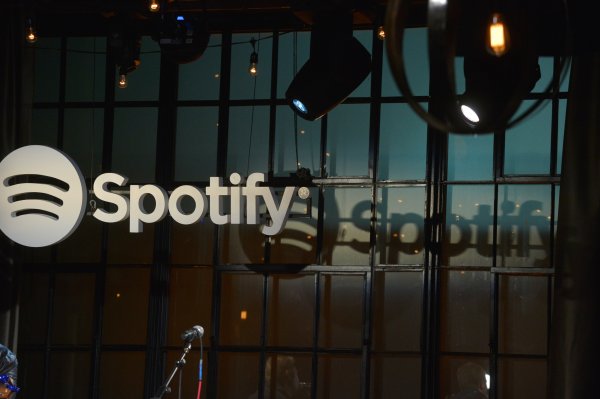 Spotify Will Send You a Personalized Mixtape Every Week
Next Up: Editor's Pick