Mick Fanning Fended Off a Shark, but Should He Have Even Been in the Water?

Beyond spiking the adrenaline of a global viewing public, the ordeal suffered by Mick Fanning — who was attacked by a shark on live TV during a World Surfing League (WSL) competition at Jeffreys Bay, South Africa, this week — is also making some wonder if he should have been in the water there at all.

The area is a “known hot spot for sharks,” reports News Corp.’s Australian news portal, news.com.au, calling on the WSL to “consider the danger of placing its athletes in a work environment where they can become a wild animal’s lunch.”

It turns out that Fanning’s near miss is just one of several shark incidents from Jeffreys Bay in the run-up to or during the event, news.com.au says. “It’s well documented, there’s been plenty of attacks here at Jeffreys,” world champion Kelly Slater told the outlet. “Today I probably thought about it 30 times.”

WSL commentator Strider Wasilewski also told of his escape from “a 15 ft.-plus great white” in the run-up to the competition.

In comments to news.com.au about the incident, WSL commissioner Kieran Perrow did not seem to hint at any plans to move future competitions. “Everyone loves Jeffreys Bay,” he said. “We come here not just for the surf but for the culture and the people and what this place means to everybody. That may take some time — for [Fanning] especially — to reconnect.”

Read the rest of the article here. 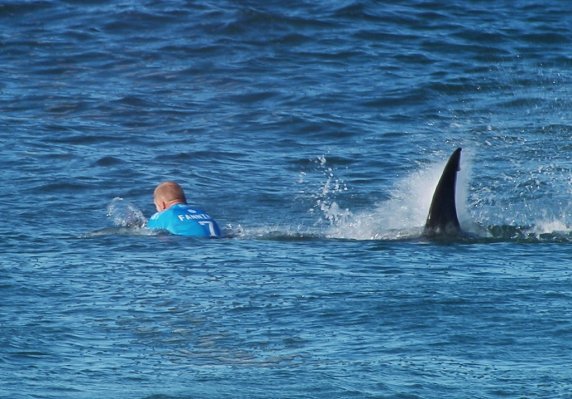 Shark Attack Surfer's Mom Speaks Out
Next Up: Editor's Pick