Republican voters favor Donald Trump over any other GOP contender for the 2016 presidential race, according to a new poll by the Washington Post and ABC News.

The poll shows a new high of 24% of registered Republicans and Republican-leaning registered voters saying they would vote for Trump if their state primary were being held today. That is nearly twice as much support in the poll as his runner up, Wisconsin Gov. Scott Walker, whom 13% support.

The last day of the poll coincided with Trump’s controversial statement that Sen. John McCain is “not a war hero,” so it’s not clear yet if those remarks have hurt his standing with voters, although many Republicans have criticized Trump over them. There was some statistically significant drop-off in support for him on that day, however.

Former Florida Gov. Jeb Bush placed third in the poll, with 12% saying they would vote for him, followed by former Arkansas Gov. Mike Huckabee with 8%.

On the left, Hillary Clinton is completely dominant with 63% of Democrats and Democratic-leaning registered voters saying they would choose her; Sen. Bernie Sanders comes in second place at 14%, closely trailed by Vice President Joe Biden (who has not declared himself as a candidate) at 12%.

The poll of 1,002 adults was conducted with cell phone and landline respondents from July 16-19. It has a margin of error of 3.5 percentage points. 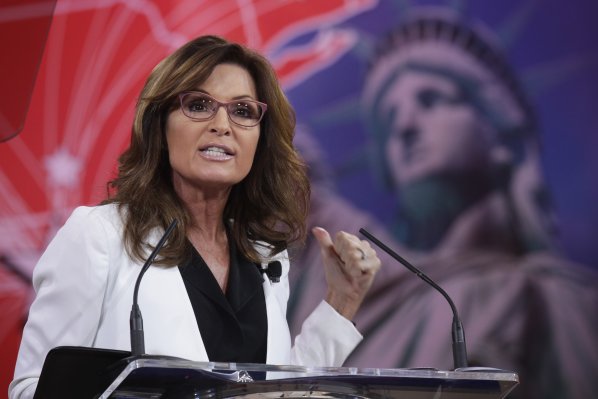 Palin Says Trump and McCain Are Both Heroes
Next Up: Editor's Pick