In this image made available by the World Surf League, Australian surfer Mick Flanning is pursued by a shark, in Jeffrey's Bay, South Africa on July 19, 2015.
World Surf League—AP
By NBC News

The mother of three-time world champion surfer Mick Fanning revealed Monday that “time stood still” as she watched live TV coverage of her son being attacked by a shark.

Elizabeth Osborne saw her son punch the predator in its back after the shark grabbed his foot rope and pulled him underwater.

“I just couldn’t believe what I was seeing,” Osborne told NBC News’ Australian partner Channel 7, after the incident at the J-Bay Open in South Africa on Sunday.

“I saw this big fin, and Mick scrambling and turning around,” she said. “And then he went down and I realized then… 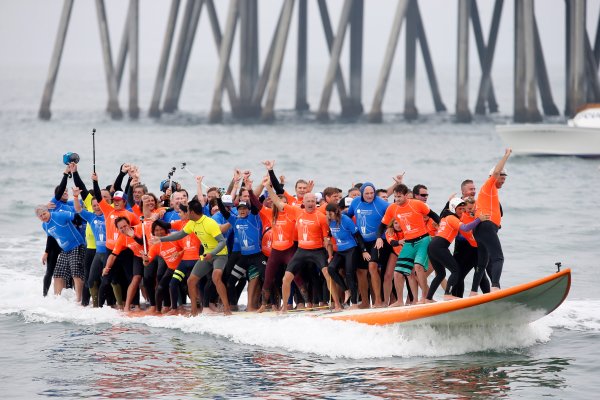 Watch 66 Surfers Break the World Record for Most People Riding a Board at Once
Next Up: Editor's Pick