Arizona Sen. John McCain said on Monday that Donald Trump does not owe him an apology for saying the Vietnam veteran is a war hero only “because he was captured”—but that he should apologize to other vets.

Asked whether Trump should apologize to him for the widely-criticized remarks, McCain said on MSNBC: “I don’t think so. I think he may owe an apology to the families of those who have sacrificed in conflict and those who have undergone the prison experience in serving their country.”

“The great honor of my life was to serve in the company of heroes,” McCain added. “I’m not a hero. but those who were my senior ranking officers, people that got the Congressional Medal of Honor winner, those that inspired us to do things we otherwise would not have been capable of doing—those are the people that I think he owes an apology to.”

It’s the first time that McCain has weighed in on Trump’s incendiary comments about him over the weekend. In an appearance in Iowa, Trump said McCain “is not a war hero,” and then added: “He is a war hero because he was captured. I like people that weren’t captured.”

“It’s just totally inappropriate for Mr. Trump to say that he doesn’t like to be with people who were captured,” McCain said.

McCain spent over five years as a prisoner of war in North Vietnam after his plane was shot down. Trump avoided the Vietnam War draft and held a comfortable job at his father’s real estate company.

A slew of Republican presidential candidates came to McCain’s defense over the weekend, lambasting Trump and calling for him to apologize for attacking McCain, the 2008 Republican presidential nominee. Secretary of State John Kerry, also a decorated Vietnam war veteran, called McCain “a hero, a man of grit and guts and character personified” for refusing early repatriation to the United States.

Trump doubled down on his attacks on McCain late Sunday, saying the longtime senator has failed veterans. 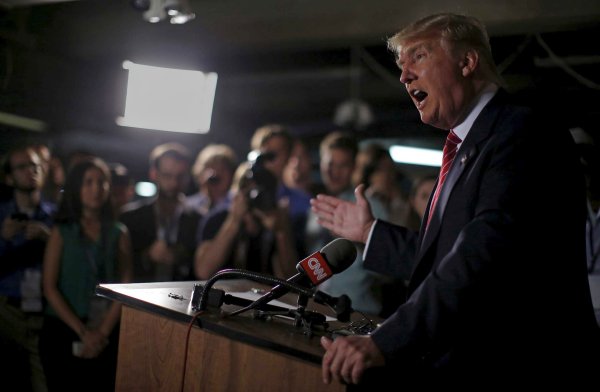 Trump Doubles Down on John McCain Attacks
Next Up: Editor's Pick