Passengers disembark as commuters wait to board a train during the morning rush hour at Kurla railway station in Mumbai, India, on Wednesday, April 15, 2015.
Dhiraj Singh—Bloomberg/Getty Images
By Rishi Iyengar

Pizza deliverymen frequently encounter less-than-ideal circumstances in the course of their jobs, often having to brave rain, snow, traffic and other adverse conditions to make their deliveries on time.

Several employees at Indian franchises of global chain Domino’s Pizza, however, find themselves facing a rather unique challenge: navigating the country’s immensely crowded and chaotic train stations to deliver to passengers inside trains that sometimes stop only for a few minutes.

Domino’s now delivers pizzas to over 200 different train lines after debuting the service this February, the Wall Street Journal reports.

After identifying 41 stations close to its franchises in India’s northern region, the fast-food chain began giving its customers the option of placing their orders (at least two hours before the train arrives at a particular station) by phone, text or the Internet. The company plans to add dozens of different routes across the South Asian nation’s dense and complex rail network in the coming months.

“It’s a huge opportunity for us,” Harneet Rajpal, a senior vice president for Domino’s India, told the Journal.

Although business isn’t exactly booming yet as far as train deliveries are concerned, the service is still going strong despite the logistical hassles — disorganized stations with a maze of platforms and notoriously unreliable trains foremost among them. Just 350 orders have been placed in the past five months, although Domino’s did manage to successfully complete all but four of them.

With tens of millions of passengers using India’s railways on a daily basis, however, the potential increase in customers offsets the innumerable risks. Other fast-food chains like Pizza Hut, KFC and Subway are negotiating a similar arrangement with India’s railway authorities.

“Nobody has heard of pizzas on trains before,” Robin Kalita, a director of the Indian Railway Catering and Tourism Corporation, told the Journal. “It’s all so new. Even we’re still learning.” 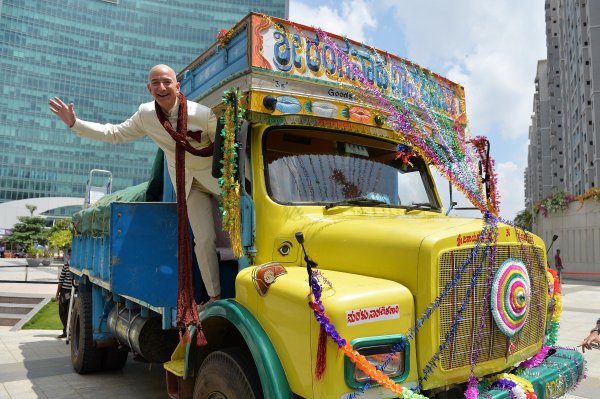 Amazon Looks to Turn India Into Firm's Biggest Market Outside the U.S.
Next Up: Editor's Pick