The most memorable image of a Ku Klux Klan rally in South Carolina Saturday undercut the group’s mission.

When the North Carolina-based Loyal White Knights of the Ku Klux Klan rallied at the steps of the South Carolina statehouse to protest the removal of the Confederate flag, one older protester was affected by the heat.

A photographer captured what happened next: Police Officer Leroy Smith, who is black, helped the protester, who was wearing a National Socialist movement T-shirt, up the stairs and out of the heat.

The photo, provided to the Associated Press by photographer Rob Godfrey, went viral Saturday night. Godfrey is the deputy chief of staff for South Carolina Gov. Nikki Haley, who pushed for the flag to be removed from the Capitol after a shooting at a Charleston church.

Read Next: Watch the Emotional Speech That Helped Bring Down the Confederate Flag 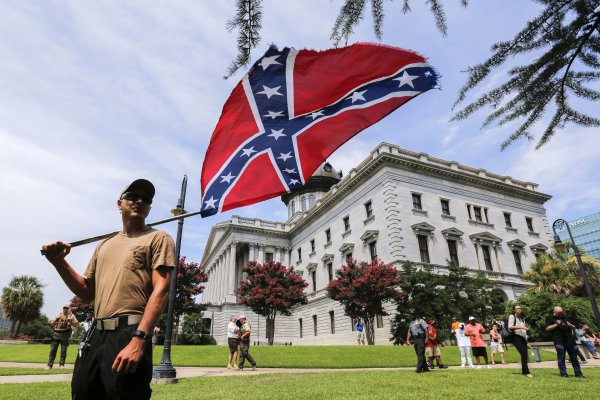 KKK Rallies for Confederate Flag in South Carolina
Next Up: Editor's Pick