Iranians Hope for Prosperity and Liberalisation From Nuclear Deal

On the evening of the historic nuclear deal reached between Iran and world powers in Vienna on Tuesday, Iranians took to the streets in their thousands to celebrate what they hope will be the end of the country’s international isolation and the beginning of economic prosperity.

With crippling international sanctions long blamed for the ruinous economy, many now hope that the lifting of those sanctions coupled with great interest by Western companies in investing in Iran will turn the page on the bleak outlook that faces most of the youth here when they enter the job market.

“Even buying a car is beyond my reach, but the deal has opened up new paths, this can be a springboard for our economy,” says 29-year-old Yahya Akhlaghi, who works in an IT company. “I’ve heard already Boing and Mercedes are trying to get contracts here and with all the extra tourists that will come this deal will stabilize the economy for sure.”

One of the main hurdles to businesses in Iran has been acquiring Western, especially American products. Navid Navidi, a 28-year-old fitness instructor says that his first preference for diet supplements are American ones, but they are rarely available and when they are it is at many times the real price. “We have to settle for lower quality supplements, which can have side effects. The same goes for exercise equipment like treadmills or elliptical, you cannot find high quality Western ones here. I’m happy there was a deal, because at least I know setting up my own gym now will be much easier.”

Apart from foreign investment and access to Western products, the hoped for economic stability will also allow many Iranian businesses to think beyond just surviving. Roozbeh Nouri, who runs an interior design company specializing in offices and exhibition stalls, says that until now most firms spend money on decorating only when they have to, and even then they just want the cheapest option, “But if the economy picks up they can spend more, especially if they have to compete with foreign companies.”

The economy aside, this deal can provide much needed momentum for reformists as the country heads into the upcoming parliamentary elections in six months’ time. Many hope that Iran will become more politically and socially open. “If the reformists take the parliament, then we can take control of the country’s politics, and that will help to transform Iran much faster. There will be more political freedom, harsh laws can be changed, not only a better livelihood but also a better life will be in reach then,” says Akhlaghi.

However not everyone is overjoyed by the deal, Reza Moravjej, who has a goods distribution business in the central town of Kashan, near the enrichment facility at Natanz, says that he is filled with pride whenever he passes the nuclear site, but he’s dismayed that from now on there will be less centrifuges there, “There are two kinds of people in Iran, those who care more for their material wellbeing, and those like me who prefer to go hungry but not tolerate bullying. I just can’t stand countries that have tens of thousands of atomic bombs forcing us to have less centrifuges because they think we might build one.”

Moravej also has a hard time trusting Western powers, pointing to a spate of assassinations of Iranian scientists related to the nuclear development in past years as an example of how the International Atomic Energy Agency inspections were abused to harm Iran’s progress. “America has shown time and again it is untrustworthy, but that’s also why I’m not worried about the deal in Vienna, I’m certain they will go back on their word, somehow or other the Americans will themselves kill the deal.” 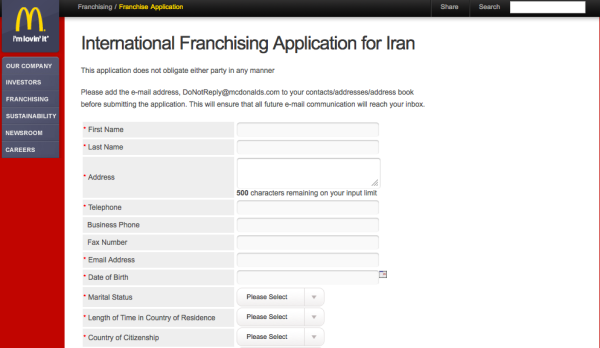 Is McDonald's Going to Open in Iran?
Next Up: Editor's Pick