Returning from a photo shoot to a suite at the Beverly Hills Four Seasons, Rachel McAdams drapes an oversized grey sweater over her bejeweled black dress and opts to go barefoot, kicking her heels into a corner. She’s sporting a more polished version of the short curly locks her character Ani wears on the second season of True Detective—a far cry from the ingenues she’s played in films like The Notebook, The Vow and Wedding Crashers. Lately McAdams has been fulfilling a career-long goal to take on grittier projects, including the HBO crime drama and the Jake Gyllenhaal boxing vehicle Southpaw, out July 24.

TIME sat down with the actress to talk learning to knife fight, the similarities between Ani from True Detective and Regina George from Mean Girls and whether she had concerns about claims that the first season of True Detective was sexist.

TIME: Your character’s weapon of choice of show is the knife. Did you have to train in knife fighting?

Rachel McAdams: It was a little unfamiliar to me, although my brother actually collected knives. So we always had them around, in a weird way. He was very responsible with them. They were his little treasures: he would clean them and take really good care of them. But I didn’t have any experience with knives.

I was working with a really in-demand martial artist, and he was working simultaneously on other films. So I would get a couple sessions in with him. But then one day I noticed my stunt double was throwing a knife around, and she was so proficient. She specialized in what I think was called close quarter prison knife fighting, and I asked her if she could train me.

We would go off and practice on our little wooden target man. We called him Woody. We’d tape up our knuckles and go to work. She was extraordinary: she’s tinier than I am, but really strong.

We talked about why she loves doing it but also what an intimate weapon it is. In order to be effective with it, you have to get so close to your enemy. It’s just so much different than a firearm.

Did that affect the way you played Ani?

Yeah. If she was ever going to be in a close quarter fight like that, she would have to be the best. [Show creator] Nic Pizzolatto gave me some samurai books to read. I think they’re featured in the first episode. So you know Ani is interested in the philosophy behind samurais as well.

I really liked the line where she says that she carries knives because men are physically stronger so if she’s attacked, it evens the playing field.

Me too. It was just very practical, and she saw the difference between the sexes so clearly. I really appreciated that. And she’s right, especially in her line of work. But as she said, she’d carry them whether she was police or not.

That frankness was refreshing. I know you’ve spoken about how you liked that she wasn’t charming. Why do you think it is so hard to find these female characters that can be an unlikable badass?

It seems like even if they are a badass, they still can’t be unlikable. You can be edgy in one way, but not all the way. I know that it’s a concern that you don’t want to lose your audience. With a film, you just don’t have time to build sympathy for the character. But I think we’re moving away from that in TV. With TV, you have a little more leeway to allow them to rise and fall and rise again and be much more complicated beings.

Ani kind of reminds me of Regina George in Mean Girls. Obviously, she’s not walking around with knives on her body.

But both characters are allowed to be unlikable and still sympathetic.

I like that because neither Regina nor Ani make any apologies for themselves. I think there’s something really powerful and refreshing about a woman who is unapologetic. But Regina used her powers for bad, and Ani at the end of the day tries to use her powers for good. So Regina really was a villain, and that’s the difference between her and Ani.

Very much so. You don’t have to tip toe around. You’re just not as self-conscious. You’re not judging from the outside as much and making sure that you’re getting just the right temperature. The more I can put Ani on her own island and isolate her, the better. And Nic was all for that.

I’m sure you were aware when you were offered this part that some people described the first season of True Detective as misogynistic. Did you have any concerns going into this season and did you express them to Nic?

This season felt like a clean slate to me. That was very liberating because there is a lot of attention on the first season, and therefore this season this well. You could really get into your head about that if you wanted to, and it wouldn’t serve you at all.

Still, people were going to be looking at you in this role and asking, “Does this meet the bar for a strong female character that was missing last season?” Did you talk with Nic about that pressure?

With any project I work on—not just True Detective—I don’t feel the need just to play a strong woman. I don’t want the audience to say, “Oh, she was so strong.” I want to play characters that are flawed and interesting.

For True Detective, Nic and I always just kind of talked character, not the bigger picture that way because I think that’s a really hard thing to control. We talked a lot about her feelings about herself in terms of her being a woman in a very male-dominated sector of society. She is not trying to be feminine. She’s saying, “This is who I am, and if I wear a low[-cut] shirt, it’s because I want to and I feel comfortable and I would wear that no matter where I was.” And that gets her into trouble because she really does walk to the beat of her own drum. She doesn’t care if she’s fitting in or not.

So in terms of her sexuality, that’s probably the only place that that came up. And then lines like the one you talked about. But it wasn’t a big topic of conversation. I think she just holds her own, and we just wanted her to do that at the end of the day. I wanted to see moments of real vulnerability with her too. There’s a strength to that as well.

You’re well known for playing romantic roles. Is there a reason that you wanted to do these two grittier projects—True Detective and Southpaw—now?

I’ve always been interested in doing that. I don’t really want to repeat myself. For the most part, I always want to be doing something new. But there aren’t a lot of gritty roles out there for women, and they are so fun to play everyone wants them. It’s not that I didn’t want to do them. It’s just competitive!

Southpaw is this very masculine story of men struggling with anger and violence. What do you think you brought to the film as a woman in that world?

I think she can play with the boys, but she does it very differently than Billy. She catches more flies with honey than him. She had a much cooler head—he’s the hothead. And I think, too, she’s learned how to use the system to their benefit, and Billy’s always bucked the system.

So she’s learned to navigate it well, and it’s a business, a sport and a lifestyle that she really enjoys. There’s complication in that too because it’s so seductive. It’s easy to get addicted to that kind of money, that kind of status. And then you lose one fight, and you fall to the bottom. Nobody’s around. All your friends are gone. I loved playing her because she’s got all this stuff going on at all times, and yet she has to look like she’s completely comfortable in this world.

A condensed version of this interview appears in the July 29, 2015 issue of TIME.

Read next: In Praise of This Summer’s ‘Complicated Women’ 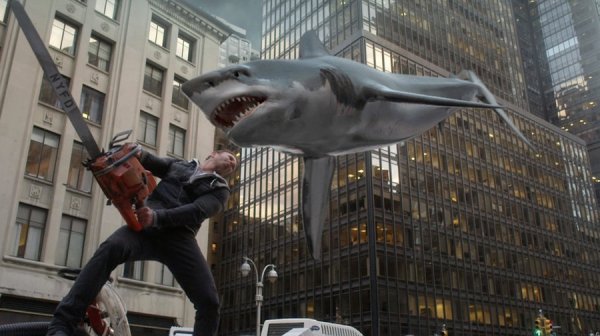 Yes, Sharknado 4 Is Happening
Next Up: Editor's Pick