Google and Airbnb became exceptions to that rule Wednesday night during ESPN’s annual ESPY awards on ABC, when they both ran ads advocating for diversity and trans-inclusion.

During the ESPY ceremony, ESPN awarded Caitlyn Jenner the Arthur Ashe Courage Award for going public with her transition.

Google capitalized on the recognition of Jenner by running a two-and-a-half minute advertisement that championed transgender individuals. The Mountain View, Calif., company first launched the video on YouTube in June to celebrate gay pride. The video received more than 1 million views on YouTube, so Google decided to air it during the ESPYs as a way to pitch itself as a trans-inclusive brand: “Not that many big brands have very publicly supported and endorsed the transgender community,” Google’s Vice President of Marketing Arjan Dijk told USA Today in an interview. “It’s a role we want to play as a brand.”

The Google ad chronicles the story of Jake Nothnagel, a 26-year-old, as he transitions from female to male. The Google tie-in is that he found a gym that supports transgender individuals in their efforts to build their new bodies.

Airbnb, the room-sharing platform, also aired a 60-minute spot during the ESPYs that’s part of its “Mankind” campaign. The “Is Mankind?” spot advocates viewing the world from alternative perspectives. “Go look through their windows so you can understand their views,” it says. “Sit at their table so you can share their tastes.” Near the end, the ad flashes “mankind,” “womankind,” “trans-kind,” “humankind.”

The transgender community has garnered new attention since the July cover of Vanity Fair featured Jenner, presenting as a woman for the first time, but plenty of challenges remain. Case in point: in all but 19 states and the District of Columbia, transgender individuals can be fire for their gender identity. 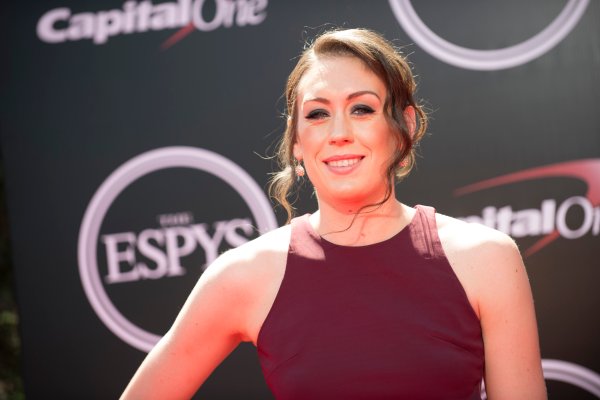 Breanna Stewart Used Her ESPY Moment to Speak Out Against Inequality
Next Up: Editor's Pick