Tame Impala Gets Funky With the Danceable Latest Album Currents

Kevin Parker, the man behind rock band Tame Impala, wants to set the record straight — he doesn’t intentionally make “stoner tunes,” he composes his music sober, and his latest album, Currents, wasn’t inspired by a messy breakup or a wild drug trip in L.A.

Currents, which drops on July 17, will be Parker’s third full-length album under the Tame Impala moniker. The synth is heavy and the beats are funky, with critics already hailing the record as a danceable follow-up to his successful first two psychedelic releases.

And despite reports of psychedelic trips on shrooms listening to the Bee Gees and complicated love stories, Parker insists that the new sound on his album comes from one thing — and it’s definitely not a joint.

“Because [psychedelic] music has the same effect on you as the drugs, people assume the two go hand in hand,” Parker tells TIME. ”If you have crazy music you don’t need drugs, and if you have drugs you don’t need crazy music.” To him, it’s his craft, not the drugs he consumes, that matter the most. “I’d be really disappointed in myself if I didn’t have any ideas and thought, ‘Oh maybe if I smoke some weed I’ll get some.’ To me that sounds really depressing.”

On Currents, his musical talent and versatility as a producer, arranger and instrumentalist are apparent. The songs don’t throb with heavy chords the same way as some of his earlier classics like “Elephant” and “Solitude Is Bliss,” but the infectious synthy pop sounds stay in your head just the same. “I feel like it would be too unnatural to stay with the same sound. A big part of the kind of fulfillment of making music is the feeling that you’re treading new terrain,” Parker tells TIME.

Parker, who records all of the instrumentation and vocals on his own, lets the synth and keyboards shine, while playing down the electric guitar, which was central in previous records. On Currents, Parker wanted to use the guitar “in the way someone who is writing a classical piece would use an oboe — suddenly fluttering in from above as opposed to some driving force.”

Lonerism and Innerspeaker, his two earlier albums, were marked by psychedelic riffs and melancholy lyrics, and at their core, the songs on Currents have the same style. Even though Currents is decidedly more pop-infused, Parker doesn’t want fans to confuse his upbeat first few singles, “Let It Happen” and “Eventually,” for happy songs.

For example, while the single “Cause I’m a Man” sounds like a sweet, falsetto-driven disco love ballad, lyrics like “I’m just pathetic, that’s the reason why/ In desperation, all that you can do is ask me why” almost make you feel sorry for Parker — and he’s totally fine with that. “A sad song that sounds sad and has sad lyrics is one-dimensional. When you mix things together that you wouldn’t immediately assume go together, it makes it more powerful.”

Critics so far are digging Currents, with music blog Pitchfork giving the album a 9.3 out of 10. Big-name collaborations with the likes of Mark Ronson, known for his love of funk, can’t have hurt either. Parker features on three songs on Ronson’s new album, including “Daffodils,” which featured lyrics from Pulitzer-prize-winning author Michael Chabon. “I think funnily enough it was a coincidence we were in a similar headspace,” Parker, who usually works alone, says. The pair will be touring together around the U.S. this summer and already played a set at Glastonbury together.

Fans shouldn’t expect Parker’s disco vibe to stick around on his next album, though. To him, every new song is an experiment in a new lyric, a new style or a new extreme. “I see it more like a pendulum. Doing an album that’s less gritty, it’s just a way to push the pendulum to one side and let it swing it back one way on the next time,” Parker says. “The further you go one way the further you go the other way.”

But this need for change hasn’t come from a desire to please his fans or his record label. “It sounds totally selfish … I make the album, I make the songs for myself first and foremost,” Parker says. “I’m still essentially doing things the same way I did when I was 14 — in a back shed with a computer or 8track and conducting little symphonies in my bedroom,” Parker laughs. “It makes me feel human.” 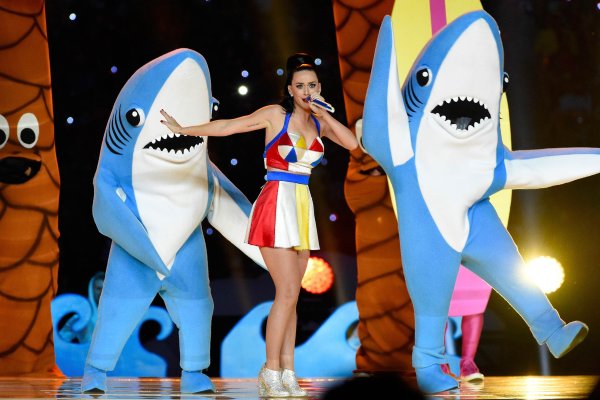 Katy Perry Thanks Left Shark for Emmy Nomination
Next Up: Editor's Pick