At 26, Emma Stone has already been a leading lady onscreen for some five years, since her 2010 breakthrough in Easy A; she recently made a well-received Broadway debut, in Cabaret, and received an Oscar nomination, for her role in Birdman. And the talent with whom she seems most eager to align herself is Woody Allen, who’s directed her in two recent films. It’s a complicated proposition for a star who’s been on the rise for as long as she’s been working, problematic in part for how intuitive it seems. Even after the 2014 furor over allegations against Allen, allying oneself closely with him will never be met with meaningful pushback.

With this week’s release of Irrational Man, in which Stone plays opposite Joaquin Phoenix, the actress follows in a long line of actresses who’ve worked with the director multiple times, including Scarlett Johansson, Dianne Wiest, Diane Keaton, and Allen’s former romantic partner Mia Farrow. (Stone had previously starred in 2014’s Magic in the Moonlight.) It’s a path that has long led to great things, professionally: Wiest and Keaton are among a long list of actresses (including, most recently, Blue Jasmine star Cate Blanchett) who’ve won Academy Awards for their roles in Allen films, while Johansson, now a critical darling, broke free from derision with strong performances in Match Point and Vicky Cristina Barcelona.

Stone’s work in Allen’s films, taken solely on its merits, seems unlikely to catapult her forward in the way others have been. In Magic in the Moonlight, she was badly miscast, placed in the midst of a period drama among stodgy Brits while adjusting no aspect of her millennial mien; her trademark frankness went beyond “refreshing” to the point of jarringly discordant. In Irrational Man, she’s a better fit, but runs up against of the limitations of the script (she’s tasked with repeatedly describing just what about Phoenix intrigues her, and falls shorter each time) and against Allen’s casting choices. In Magic in the Moonlight, Stone is romanced by Colin Firth, 28 years her senior. The difference between Stone and Irrational Man lead Phoenix is a mere 14 years.

These differences in age aren’t just theoretical. They get to the heart of the two problems for any actress who wants to work with Allen. The first, and lesser, is technical: Allen is famously unwilling to provide direction to his actors, allowing them to feel through their roles for themselves. Stone, so adept elsewhere, seemed utterly at a loss with Firth. She makes more magic with Phoenix in her new film, but the twists of the plot—Stone is in love with Phoenix’s philosophy professor, who comes to be disgusted by Phoenix’s absolutism in defense of his beliefs—appear, frankly, difficult to navigate in the absence of direction. Neither a put-together Stone’s defense of a disheveled Phoenix’s “burnout look” as sexy nor her self-denying remark at a restaurant—”I love that you order for me!”—square with any aspect of Stone’s well-defined personality, and she doesn’t give us anything new.

In that absence of enough direction to make any role intriguing, there are two sorts of women in Allen films—the type who win acting awards as a result of how much they’re given to do, and the ones who exist as young and appealing fixtures in the lives of male leads. In the first category falls Johansson in Match Point, Blanchett in Blue Jasmine, and Parker Posey, who steals the show in Irrational Man. Stone, sadly, has now fallen twice into the second group.

Yes, Stone would likely carry across the love affair more ably under the hand of a more active director. But that’s a useless thought experiment: What other prominent director, twice granted access to one of the most widely-admired young actresses working, would twice give her roles whose entire purpose is bland repartee with father figures? This gives rise to the greater problem with Stone’s work for Allen: That it represents a whole new generation giving the thumbs-up to a figure whom it’s morally complex (at best) to support. Whether or not something from life is playing itself out in Allen’s twice placing Stone into pairings with significantly older romantic partners, it calls to mind darker, more uncomfortable aspects for any audience member.

In a 2014 op-ed, Dylan Farrow, the daughter of actress Mia, alleged sexual abuse by Allen committed when the author had been seven years old. She asked Stone, Blanchett, Johansson, and others how they could work with Allen, and it’s a legitimate question: Though Allen has not been charged with a crime, the degree to which scandal has followed him for decades makes working with him, particularly for a female star, a decision that requires willful blindness to a lot that’s troubling.

What’s in it for Stone? She’s not doing her best work in Irrational Man—while the role gives her just enough to play and she does a decent job, she seems off-balance throughout. And in spite of her attempts to make Allen seem cute for a new generation, as with a much-circulated anecdote about how she taught him about Twitter, just like she did her onscreen dad in Birdman, there’s still a penumbra of weirdness surrounding an actress willing to put herself forward as Allen’s designated star at this particular moment in time.

Stone, though, appears to have fairly limited options. She’s a gifted performer who’s already done the franchise thing, and, since there are no big-budget films centered around the lives of women, that leaves lower-budget cinema the only option. Choosing independent films by less established directors would represent a substantive risk. Woody Allen’s films are made without turbulence and widely-seen. Taking on a role in them represents a potential opportunity to try something new and to get credibility. That the new thing Allen has twice had Stone try is “What if you were dumber than you are, and into an older man?,” and that there are so few other onscreen opportunities for an actress to do meaningful work, isn’t Stone’s fault—but it’s become her problem. 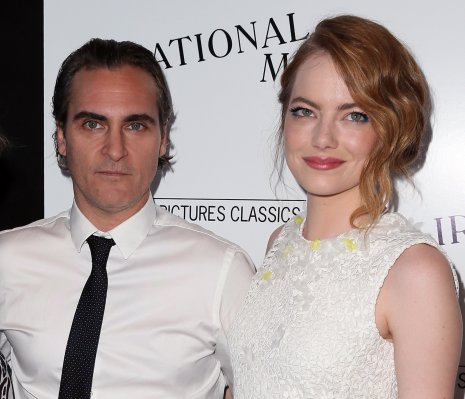 A Handy Guide to All the Philosophers Referenced in Irrational Man
Next Up: Editor's Pick