The New Republican Power Players in 2016: Wives (And One Husband)

New Jersey Gov. Chris Christie was making his way slowly down Main Street in Wolfeboro, New Hampshire, held up by yet another fan who wanted a selfie along the parade’s route. The process was delaying the day in July, throwing the whole campaign off-schedule and making Christie’s aides nervous about making it to the next stop. Enter Mary Pat Christie, campaign’s all-purpose fixer. Her task for the day: be the antidote to any long-winded well-wisher or fat-fingered iPhone user.

“Hi, I’m Mary Pat,” she said with an outstretched hand, breaking into the conversation. She subtly grabbed her husband’s elbow and said quietly, “We’ve got to go.” She directed him to the next group of supporters in a way that didn’t offend the voter and got the job done.

Mary Pat Christie is just one of the examples of a politically savvy, deeply involved spouses who are having an impact on the Republicans’ crowded chase of the presidential nomination. Some more subtly than others, these women—and one man—are weighing in on policy, schedules, staff, tactics and strategies. Among them are two Wall Street executives (Mary Pat Christie and Heidi Cruz) who traded their jobs for campaign roles, two nurses (Anita Perry and Karen Santorum), an almost-PhD (Supriya Jindal) and a political consultant (Kelley Paul) who once counted a rival to her husband (Ted Cruz) as a client. Another (Frank Fiorina) left his job as a vice president at AT&T to support his wife’s business career and is a constant figure in her endeavors.

Gone are the days when voters considered it out of bounds when a wife troubled herself with politics or policy. In 1992, Bill and Hillary Clinton were on defense over the idea that she would have a policy role at the White House and a strategic role in the campaign. Now similar two-for-one offerings on the campaign trail are as common as not.

“We’re good partners,” Mary Pat Christie explained to TIME days later. “We have been our whole life. We’ve been married almost 30 years. No one knows each other better than we do.” It’s why, from time to time, she settles into the chair next to her husband when his advisers are ready to start a political briefing. And when he is looking to rake in Wall Street cash, Mary Pat Christie’s Rolodex is invaluable.

Even as Christie was declaring his intentions to run for President, he made a nod that Mary Pat was part of the deal. “Everyone thinks I’m the politician in the family. We did a coin flip when we got married. I called tails. Tails never fails so I’m the guy who ran,” Christie said. “But the politician just as good as me in the family is the woman that I met all those years ago at the University of Delaware.”

For sure, there are less politically involved spouses in the mix, too. Columba Bush, the wife of Jeb, clings to her privacy and insists she never talks policy with her husband. Marco Rubio’s wife, Jeanette, remains focused on raising four children at home in West Miami. Karen Santorum is a full-time caregiver to a daughter who requires near-constant medical attention because of a genetic disorder. “While she may be a great asset on a campaign, she is an indispensable asset at home,” former Sen. Rick Santorum says.

But this is hardly the field of quiet would-be First Ladies standing silently at heir husbands’ sides. If their lives are going to be upended for the unmatched challenge of running for the White House, they’re going to pitch in. Mary Pat left her job as a managing director and bond trader at Angelo Gordon to focus on the campaign. Heidi Cruz is on leave from her job as a managing director at financial giant Goldman Sachs, and has set up shop inside her husband’s campaign. (Heidi Cruz met Ted while working on George W. Bush’s presidential campaign in 2000.)

Similarly, Anita Perry and Janet Huckabee are among the closest political advisers to their spouses and have hired their own chiefs of staff to run their political operations at campaign headquarters. Kelley Paul often schedules campaign events of her own as her husband is tied up with his day job in the Senate. Paul’s advisers describe Kelley Paul, herself a successful political consultant and author, as their best advocate among female voters.

Tonette Walker is described as one of Wisconsin Gov. Scott Walker’s biggest boosters—and challengers when she disagrees with him, as she did when he came out forcefully against the Supreme Court’s ruling on gay marriage. “I was torn,” she said in one interview, noting she is very close to a female cousin and her wife. Conservatives immediately criticized the Governor over his wife’s positions. “Someone with a leftist wife is going to have a hard time,” Michael Farris, founder of the Home School Legal Defense Association, tells TIME.

It’s a tough balancing act for these spouses, especially those putting their careers on hold to pitch in with their partners. “I’ll do as much as I can, as long as I can keep that balance with my children at home and life on the road,” said Mary Pat Christie, who chatted with former First Lady Barbara Bush about what to expect during a challenging campaign. It left her unfazed.

With reporting by Zeke Miller in Wolfeboro, N.H. 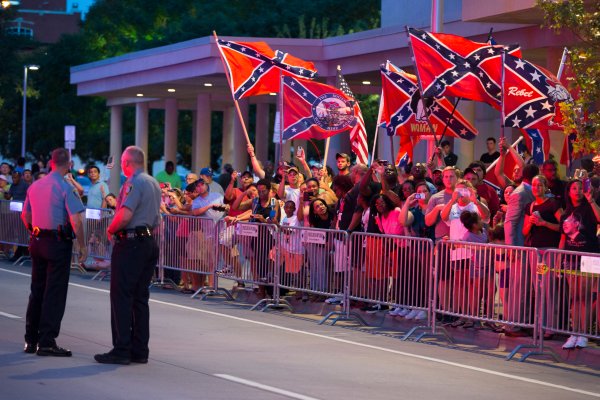