27 Killed in a Stampede at a Religious Festival in India

Indian devotees gather after a stampede at a religious festival in Godavari in the Rajahmundry district some 200 kms north-east of Hyderabad on July 14, 2015.
STRDEL—AFP/Getty Images
By Rishi Iyengar

More than two dozen people were killed during a stampede in India on Tuesday, during a religious ceremony on the banks of a major river in the country’s south.

A total of 27 people were killed while trying to rush towards the Godavari river at Rajahmundry in the state of Andhra Pradesh, while another 29 were injured, Agence France-Presse reported.

“At least two of the 29 injured are critical,” a spokesman for Andhra Pradesh Chief Minister Chandrababu Naidu said. Indian news channel NDTV reported that 25 of the deceased were women.

Tens of thousands of pilgrims had flocked to Rajahmundry to participate in the Maha Pushkaralu festival, a 12-day event that takes place once every 144 years when attendees bathe in the river as a spiritual purification rite. More than 10 million people are expected to visit the festival over the next two weeks.

Stampedes are sadly frequent in India and other parts of South Asia, where historic sites are other venues are frequently not designed for the large numbers using them.

A stampede on Friday in Bangladesh killed at least 23 people. Tuesday meanwhile marks the beginning of the Kumbh Mela in the western Indian city of Nashik, a Hindu festival where stampedes have taken place on several occasions in the past. 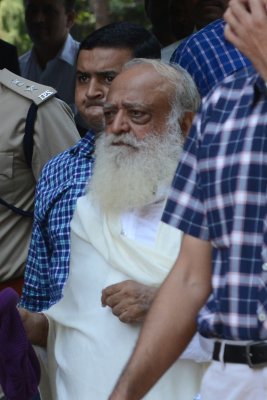 Witness in Rape Case Against Indian Guru Shot Dead
Next Up: Editor's Pick