Alan Morison, right, Australian editor of the website Phuketwan and his colleague Chutima Sidasathien speak to the media ahead of their appearance in court to face charges of violating Thailand's Computer Crime Act in Phuket, Thailand, Tuesday, July 14, 2015
Thanyarat Doksone—AP
By Joanna Plucinska

Two Thailand-based journalists appeared in court Tuesday to answer criminal defamation charges over their citing of a Pulitzer Prize–winning Reuters report that alleged certain members of the Thai navy were in cahoots with human traffickers.

Alan Morison, the Australian editor of the Phuketwan news website, and his Thai colleague Chutima Sidasathian both face up to seven years in prison if convicted.

No charges have been laid against Reuters, the journalists who reported the source article or the scores of other media that carried the allegations, prompting human-rights groups to accuse the Thai authorities of attempting to muzzle the press by making an example of one comparatively small outlet.

“The real message of this trial to Thailand’s journalists is report at your own risk because big brother in Bangkok is watching,” Phil Robertson, the deputy director of Human Rights Watch’s Asia Division, said in a statement. Morison and Chutima, he added, are “two courageous journalists who are not afraid to fight for their principles. They deserve the international community’s unstinting support.”

The Phuketwan journalists are being tried over a paragraph they reproduced that quoted an anonymous smuggler, who said the Thai navy turned a profit from ignoring the trafficking of Burma’s Rohingya Muslim minority. The treatment of the stateless Rohingya in Thailand has been covered extensively in the media in the past few years, and Phuketwan has also garnered positive accolades for its reporting on the subject.

The trial will last three days, reports the Guardian, after which the judge will have 30 days to come up with a verdict. The trial will include testimony from Thai navy officials.

“It’s uncharacteristic of the Thai navy, which is an honorable organization,” Morison told reporters outside the Thai courthouse. 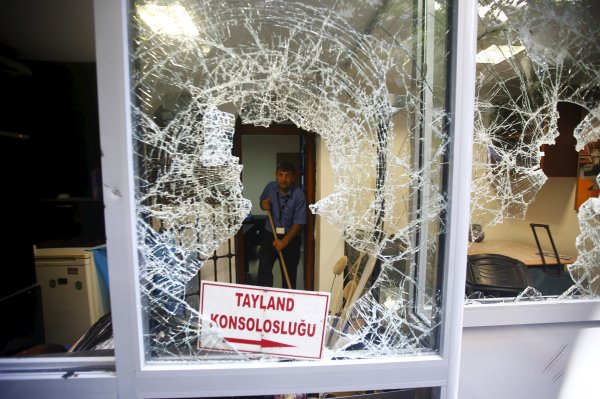 Thailand Defends Deportation of Uighur Migrants to China
Next Up: Editor's Pick