Todd Frazier of the Cincinnati Reds reacts during the Home Run Derby in Cincinnati on July 13, 2015
Jeff Roberson—AP
By Joanna Plucinska

Unsettled weather had earlier threatened to rain off the event, but after a quick downpour, the competition went ahead. The rain, however, could affect Tuesday night’s All-Star Game, NBC reports.

The rules of the Home Run Derby were amended this year. Typically, sluggers are pitted against each other to see who can hit the most home runs in a five-minute time limit. With the inclement weather, the MLB changed the format to bracket structure, and the time limit was shortened to four minutes, adding a sense of urgency to the hitting game. Players also received an additional 30 seconds if they hit at least two 425-ft. home runs. Frazier was awarded one of these 30-second extensions en route to victory.

The Home Run Derby is one of the festivities at Major League Baseball’s All-Star weekend in Cincinnati, hosted by the Reds, which culminates in Tuesday’s All-Star Game.

Frazier was a favorite throughout the night as Reds supporters cheered him on through every home run, AP says. “No pressure here with these fans,” he said after accepting his trophy. 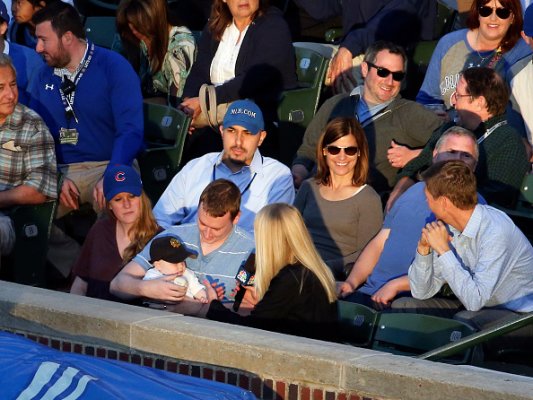 Watch This Baseball Fan Effortlessly Catch a Foul Ball While Holding a Baby
Next Up: Editor's Pick