Prince William Just Dropped a Hint About Another Royal Baby

Prince William joined the rest of the working world on Monday, starting his new job as an air ambulance helicopter pilot. But the Duke of Cambridge is confident that his career aspirations, along with the recent arrival of baby Charlotte, will not stretch him too thin.

“I like the challenge,” he told Sky News in an interview released Monday. “It’s been obviously fantastic and she’s been a little joy of heaven.”

But William did admit that the addition of Charlotte made things at home hectic at times. “It’s more responsibility looking after two little ones, especially when George is around as he’s a little monkey,” he said.

Still, it seems Kate is holding up just fine, with William praising her as doing “an amazing job as a mother.”

Prince William injected a little royal modesty when asked if it is going to be difficult to leave his family for work every morning.

“No more difficult than everyone else has to do,” he said.

But it might get increasingly difficult, as he alluded to a potential third royal baby.

“We’ve only just had the second one,” he said. “[But] you never know what’s going to happen in the future.” 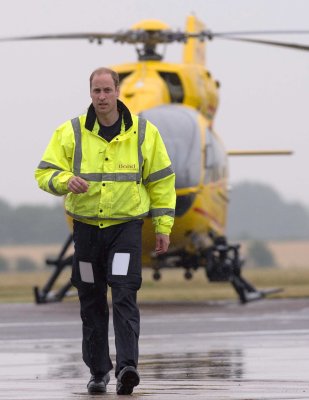