Rick Santorum Hits Donald Trump: 'All That Glitters Is Not Gold'

Rick Santorum gets why people are responding to Donald Trump’s bluster about immigration. The former Senator from Pennsylvania just hopes voters take a minute to look at what his billionaire rival for the GOP actually stands for when it comes to policy.

“All that glitters is not gold,” Santorum said with a sly smile Monday as he was asked repeated about Trump and his sudden success among Republicans trying to capture the White House nomination. “He may be tough on the border, on a lot of other immigration issues, but he’s not a conservative on these things.”

The tough line comes as Trump is surging in national polls as likely Republican voters respond positively to his tell-it-like-it-is pitch on immigration. Trump drew thousands for a speech in Arizona on Saturday and shows no sign of letting up on his position that immigrants from Mexico are criminals and that the Mexican government is behind a growing boycott of Trump’s businesses.

“The silent majority is back, and we’re going to take the country back,” Trump said, echoing Richard Nixon’s famous speech about the Vietnam War protests. “We’re going to make America great again.”

Santorum, the 2012 runner-up who is trying again for the GOP nomination, wants to remind voters that he has been tougher on immigration far longer than Trump has been considered a semi-plausible contender. “I saw Donald over the weekend talking about how he wants more and easier legal immigration. He wants more people coming in and wants to make it easier,” Santorum said. “I have a very different approach to that.”

Santorum, indeed, has been at the forefront in calling for 25% fewer immigrants allowed to enter the United States—legally or otherwise—in order to protect jobs for low-skilled Americans’ jobs. “Since 2000, there have been about 6.5 million net new jobs created in this country. What percentage of those net new jobs are held by people who are in this country but not born in this country? The answer is all of them. There are fewer native-born Americans working today than there was in the year 2000,” Santorum said Monday.

“We have more people living in this country who were not born here than at any point in our history,” Santorum said to another question from a reporter at a breakfast organized by The Christian Science Monitor.

For Santorum, who is lagging in the polls and is likely to be excluded from next month’s GOP debate, attacking former reality-show star Trump is a surefire way to grab headlines. With more Americans excited about the immigration debate than the odds of a President Santorum, the tactic is a way to insert Santorum into a conservative that has largely excluded him.

It’s also a way for Santorum to criticize Trump, whose grandiose appearances often lack the specific policy proposals. Santorum, who rose to the No. 3 Republican in the Senate, cannot be accused of lacking a wonk streak. 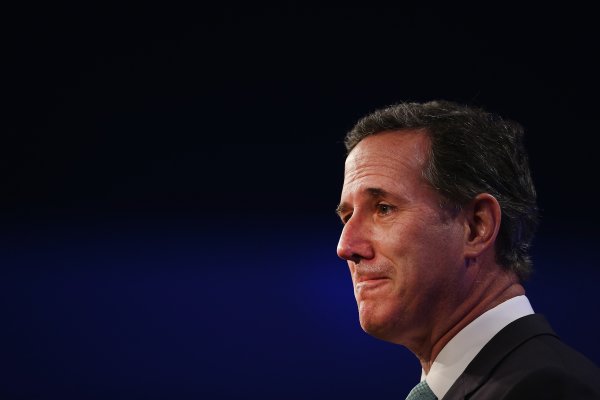