Camille Paglia: What a Woman President Should Be Like

Ideas
By Camille Paglia
Paglia is the author of Free Women, Free Men

Why has the U.S., the cradle of modern democracy, never had a woman President?

Incredulous young feminists, watching female heads of state multiply from Brazil and Norway to Namibia and Bangladesh, denounce this glaring omission as blatant sexism. But there are systemic factors, arising from the Constitution, popular tradition, and our electoral process, that have inhibited American women from attaining the highest office in the land.

The U.S. President is not just Chief Executive but Commander in Chief of the armed forces, an anomaly that requires manifest personal authority, particularly during periods of global instability. Women politicians, routinely focused on social-welfare needs, must demonstrate greater involvement with international and military affairs.

Second, the President has a ceremonial function, like that of the British royal family, in symbolically representing the history and prestige of the nation. Hence voters subliminally look for gravitas, an ancient term describing the laconic dignity of Roman senators. The President must project steadiness, sober reserve and deliberative judgment. Many women, who tend to talk faster and smile more than men, have trouble with gravitas as performance art.

Third, the complex, coast-to-coast primary system in the U.S. forces presidential candidates into well over a year of brutal competition for funding and grassroots support. Their lives are usurped by family-disrupting travel, stroking of rich donors, and tutelage by professional consultants and PR flacks. This exhausting, venal marathon requires enormous physical stamina and perhaps ethical desensitization to survive it.

In contrast, many heads of state elsewhere ascend through their internal party structure. They are automatically elevated to Prime Minister when their party wins a national election. This parliamentary system of government has been far more favorable for the steady rise of women to the top.

The protracted and ruthlessly gladiatorial U.S. electoral process drives talented women politicians away from the fray. What has kept women from winning the White House is not simple sexism but their own reluctance to subject themselves to the harsh scrutiny and ritual abuse of the presidential sweepstakes.

For example, two eminently qualified and experienced Democrats never launched presidential campaigns when they could have over the past 25 years: Senator Dianne Feinstein, with her deep knowledge of defense and intelligence issues, and Congresswoman Nancy Pelosi, the first female Speaker of the House of Representatives and therefore the highest-ranking woman in U.S. history. Yet a marginal Democratic Congressman like the boyish Dennis Kucinich had the ambition and moxie to mount two quixotic presidential bids in 2004 and 2008.

Most of the American electorate has probably been ready for a woman president for some time. But that woman must have the right array of qualities and ideally have risen to prominence through her own talents and not (like Hillary Clinton or Argentina’s President Cristina Fernández de Kirchner) through her marriage to a powerful man.

What characteristics would be desirable in a woman President?

She must find a happy middle ground between the trumpet-like triumphalism of Margaret Thatcher, Iron Lady of the Falklands War, and the swooning cult of personality of Evita Perón, dangling boons and bribes before the masses. She should show consistency of ideology, avoiding poll-driven flip-flops. How she manages her campaign signals her executive competence to run the labyrinthine federal bureaucracy.

She must be statesmanlike, pursuing women’s progress without playing victim or bashing men. She must deal forthrightly with the news media, a political reality since 18th century Great Britain. In 1984, Geraldine Ferraro, the first female vice-presidential nominee of a major party, held a high-stakes, two-hour, no-holds-barred press conference that was a bravura display of tough, courageous candor. Alaska Governor Sarah Palin’s exuberant promise as a national figure was short-circuited by her thin-skinned inability to handle the hostile press. Current GOP candidate Carly Fiorina, though ultimately limited by her lack of government experience, is remarkably nimble in jousting with the media.

Former Cabinet Secretary Elizabeth Dole’s bold GOP presidential run in 1999 was torpedoed by her too rote and chirpy Southern-belle delivery, leading to her withdrawal for lack of funding. Feinstein has a grande-dame gravitas as well as nerves of steel, demonstrated by her heroic composure after the 1978 massacre in San Francisco City Hall.

But today’s best model for aspiring women politicians is German Chancellor Angela Merkel, who combines a take-charge persona with engaging spontaneity and zest for life. She is a soccer fan, an opera lover, and a home cook and gardener — a real person, not the prisoner in a gilded cage that our heavily guarded American Presidents have become.

Read next: These 8 World Leaders Are Taking Major Steps Towards Gender Equality 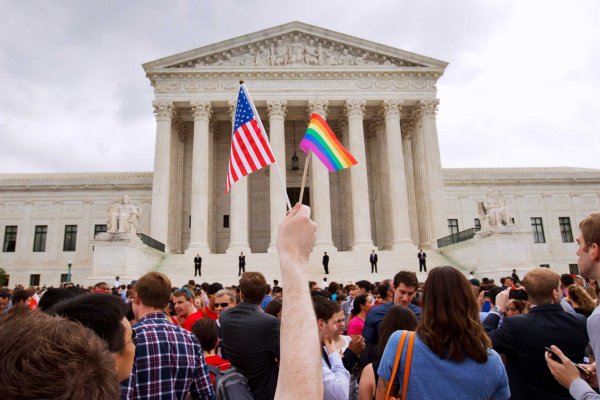 What It Means When Marriage Is a Contract
Next Up: Editor's Pick