‘The Simpsons’ Real-life Duff Beer Will Soon Go On Sale

Homer’s favorite Beer, Duff, is available at the ‘brewery’ in the Springfield area of Universal Studios in Orlando, Fla.
Miami Herald—MCT via Getty Images
By Jonathan Chew / Fortune

Homer Simpson’s favorite beer will soon make the leap from the small screen to bars across the world.

21st Century Fox, the owner of the long-running and beloved animated franchise The Simpsons, will be officially rolling out a real-life version of Duff Beer in Chile this month, and possibly South America and Europe by early next year, according to The Wall Street Journal.

“I think there’s potential to have Duff everywhere in the world,” Jeffrey Godsick, president of the Fox’s consumer products division, told the Journal.

The reason for the real-life debut of Duff is simple: Unauthorized versions of the beer have been proliferating, especially in Chile, where Fox filed an intellectual property complaint that led local police to seize contraband bottles by the thousands. This has led to a much different strategy: if you can’t beat ’em, join ’em.

“Once you see enough piracy, you are faced with two choices,” Godsick said. “One is deciding to fight it, and the other is deciding to go out [into the market] with it.”

If you’re wondering what a Duff could taste like, it’ll apparently contain a hint of fruit and a “caramel aromatic”. Unfortunately, if you’re hoping to take a swig of a Duff State-side, you’re out of luck: other than “Simpsons” section of Universal’s theme parks in Orlando and Los Angeles, no Duff will be sold in the U.S. 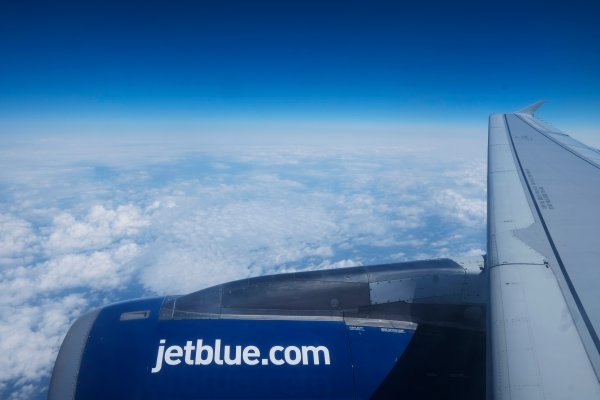 This JetBlue Video Shows You How Not to Behave at the Airport
Next Up: Editor's Pick