Republican presidential candidate Rick Santorum told a group of national reporters Monday that cable television bookers have too much power to determine who appears at the upcoming debates because they choose who gets news coverage.

“The people who set the game up actually have the biggest influence on who gets in and who doesn’t,” Santorum said of the GOP’s debate partners. “They control in some respects the ability to put their thumb on the scale.”

In less than a month, the top contenders for the Republicans’ presidential nomination will meet for their first debate. Fox News Channel says it will look at a survey of national polls and put the top 10 candidates on its Cleveland stage, while the remainder of hopefuls will find themselves relegated to watching the proceedings on TV. CNN, which will host a debate in the fall, has also said it will use national poll numbers to determine the debate lineup.

“What’s driving national numbers is news coverage,” Santorum said during a meeting with reporters organized by The Christian Science Monitor.

Santorum, a former Pennsylvania Senator who was the runner-up for the GOP nomination in 2012, says that journalists are playing favorites as they decide who to cover in the massive field of as many as 20 Republican candidates for President. As it stands, there is a solid chance that Santorum, who is polling in the low single digits nationally, will not make the cut for the first debate. It’s similar in the early nominating states, such as Iowa and New Hampshire; Santorum is near the back of the packs there despite essentially camping out in Iowa, the state that gave him a surprise win in its caucuses back in early 2012.

Santorum, who once was a paid contributor to Fox News, said he finds it unacceptable that the Republican National Committee is allowing a news organization to decide its eligibility threshold in such a crowded field. “It’s a miscarriage by the RNC to agree to that,” Santorum said.

Debate organizers have argued that they would not be able to find a stage big enough to accommodate every candidate, and it was not reasonable to lump long-shot candidates with more credible options such as former Florida Gov. Jeb Bush or Wisconsin Gov. Scott Walker.

Santorum said he does not have evidence that the networks are intentionally playing favorites, either to help others or to hurt him. But he said voters should not allow conservative-leaning Fox News to cull the field this early in the process. Iowa is not scheduled to have its leadoff caucuses until Feb. 1, 2016.

So far, that has not happened. Santorum shrugs. During his 2012 campaign, he emerged as the leading foil to eventual nominee Mitt Romney without much of a showing in the debates.

“Can you think of a memorable line that Rick Santorum said?” Santorum asked. “No. That’s not me.”

It is why Santorum is heading back to Iowa. Over the next 33 days, he will spend 19 of them in Iowa in the hopes of repeating his upset win over Romney there four years ago. 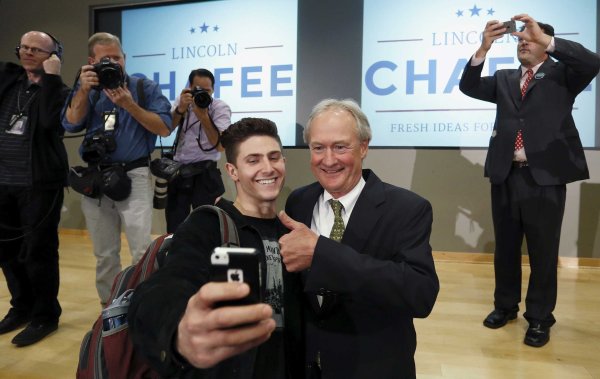 Lincoln Chaffee Picks Up His Campaign's Gas and Hotel Bills
Next Up: Editor's Pick