Alan Hruby, the 20-year-old who confessed to murdering his wealthy parents and sister last October, says in a letter that he welcomes capital punishment.

In the letter, sent from the Oklahoma State Penitentiary where he currently resides to The Oklahoman newspaper, Hruby wrote: “I 100% welcome the death penelty! What occured is so horrible it is deserved. It is so unspeakable.”

The letter, which is riddled with spelling errors, is a response to a message the newspaper sent Hruby last month. The paper asked him why he committed the gruesome crime and Hruby answered that he’s still trying to figure that out himself.

“This didn’t happen because of shopping,” he wrote, which contradicts what he initially told police. “My shopping wasn’t something I or my parents could not pay. They just thought my spending was out of control, and it was.”

Hruby’s family was found shot to death last year inside their Oklahoma home. Hruby confessed to the murders just a day later. When asked by authorities why he killed his entire family, Hruby said he “had been cut off financially … due to an abundance of spending in recent times.”

“He felt like if he murdered his mother, his father and his sister, he would be the only one, the only heir, to their estate,” Stephens County District Attorney Jason Hicks said at the time.

“I didn’t feel like myself that day,” Hruby continued in the letter. “This was not something that seemed like a conceiveable option.”

He added: “Why? I’m still trying to work it out. Trying to figure all of this out.”

Prosecutors have said they will seek the death penalty in the trial.

Hruby is currently serving three years in prison for credit card fraud after stealing his grandmother’s credit card and ringing up nearly $5,000 in charges while overseas.

He is charged with three counts of first-degree murder in the deaths of his sister and parents. 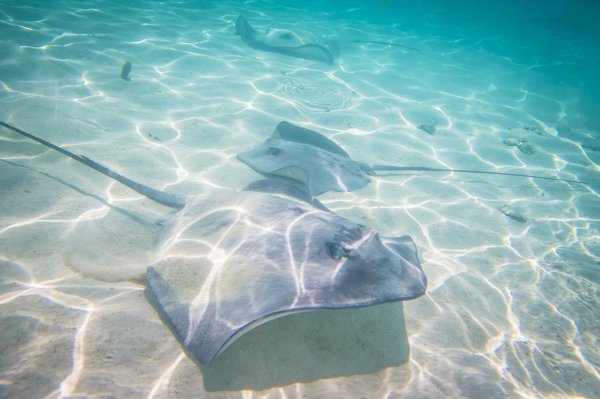 54 Stingrays Dead at Chicago Zoo
Next Up: Editor's Pick