Warner Bros. also brought Pan and The Man from U.N.C.L.E. to the convention center’s 6,100-seat Hall H, but the fans were most excited to get a glimpse of the DC Entertainment film, directed by Zack Snyder, who continues helming the mega-franchise after 2013’sMan of Steel. The Batman, Superman and Wonder Woman actors were joined on stage by Snyder, Amy Adams, Jesse Eisenberg, Jeremy Irons and Holly Hunter.

Snyder unveiled a trailer for the film, which showed off Affleck and Gadot’s costumes and plenty of action. And an extended clip featured Cavill’s Superman testifying in front of a committee, Wayne Tower being demolished, Affleck’s Batman getting an enchanced suit, and the duo facing off.

Synder spoke about his love of Frank Miller’s The Dark Knight Returns, but said the film’s story “is one we came up with on our own.”

Affleck, who is taking over the cape and cowl from Christian Bale, said his predecessor gave him some good advice. When Affleck took his son to get a Batman costume for Halloween, he ran into Bale and asked for a tip. “Make sure you can piss in that suit,” Bale told him.

But for the most part, Affleck said, he tries to keep the other Batmen out of his mind. “If I thought too hard about who came before… I couldn’t do it,” he said. Affleck’s version, like Frank Miller’s, is burned out and at the end of his rope, the actor said. 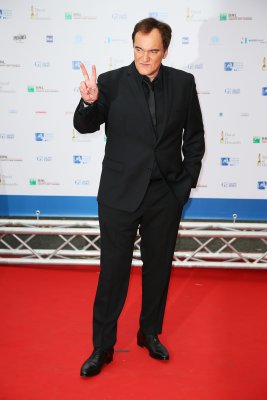 Quentin Tarantino Says He'll Film Another Western and Ennio Morricone Will Score The Hateful Eight
Next Up: Editor's Pick